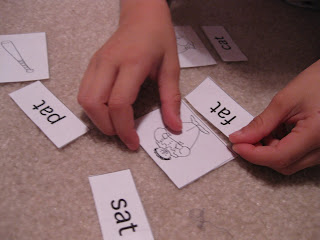 Maddy has been really adamant about me “tutoring” her, so for the last few weeks, I’ve been trying to do a little more obvious–less sneaky–work with her every few nights.

I started by giving her the Primary Spelling Inventory from Words Their Way (2004), which is recommended for kindergarten through third grade. I use this assessment when I tutor any of my younger students because it shows me where I should begin work with word learning.

Maddy’s results showed me that she is at the Middle Letter Name-Alphabetic Stage*, so my work with her will focus on having her increase known features at this level.

Usually, teachers might take a day for introducing the sort in a group, then a day for re-sorting and writing, then a day for a buddy sort, a day for a word hunt (hunt for the given words in a Guided Reading text or other text) or sort with teacher, and then a final day for testing and/or games. Rarely does it work so perfectly, but any repeated practice is worthwhile. 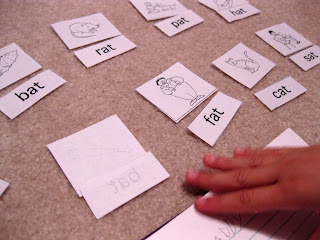 So when Maddy and I revisited this sort, I just said, Okay, Maddy, I assessed you last night, so just like the students I tutor, now I know exactly where we need to begin. We’ll start simple and get a little more difficult as we go. Tonight, we’re going to start with a picture and word sort for the -at family. Let’s put these pictures in a column and say them as together.

We identified each picture, and then I said, Here are all of the word cards that go with the pictures. Can you try to match each word to the correct picture?

I let her go on her own, and it was way too easy; I should have begun with a two- family sort, but I also didn’t want to frustrate her. Now I know. . .

What she did want was more writing and word learning, so we took out her Writer’s Notebook (really just a spiral notebook), and I had her copy each word on a page labeled, AT Family.

This, she loved. As she wrote each word, she read it and flipped it over, just to make it a little easier. 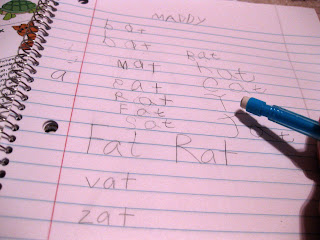 Working in her Writer’s Notebook
Why on earth would I have written ‘fat’ and ‘rat’ with uppercase letters?

When she finished, we brainstormed new words and added them to the list. It doesn’t matter if the words are non-sense words; in fact, it’s fine. Just as long as she’s pronouncing the words correctly, any word counts. It’s usually the silly ones that get giggles–and who can complain about a kiddo laughing and learning at the same time?

The night after this, I had Maddy re-sort the words and then we did a few speedy sorts, which Maddy and Owen always seem to enjoy. Then we took out a few of her reading a-z books, and we went on a word hunt, searching for any -at family words in the texts and then she wrote them in her notebook.

That’s it. So fun and so easy. And absolutely, totally, and completely not sneaky at all. . .

My next few steps related to these lessons will be:

*Learners at the Middle Letter-Name Alphabetic Stage are usually in Kindergarten through grade three, but, like situation, some are older and some are younger. Usually these students can correctly spell initial and final consonants in words and some blends and digraphs. They often use letter names to spell vowel sounds and omit silent letters (min/ mine; driv/ drive; tep/ tip; bak/ back). Often they finger point and can read aloud, slowly and word-by-word.

Thanks again to one of my favorite resources ever, Bear’s Words Their Way (2004) for the Primary Spelling Inventory, the -at family picture/ word sort, and the flip book.

I created the -at/ -an sort and the -ad/ -ap/ -ag sort, not because I enjoy reinventing the wheel but because I can’t stand that WTW uses the fancy ‘a’ instead of the ‘a’ they teach our kiddos to actually write.