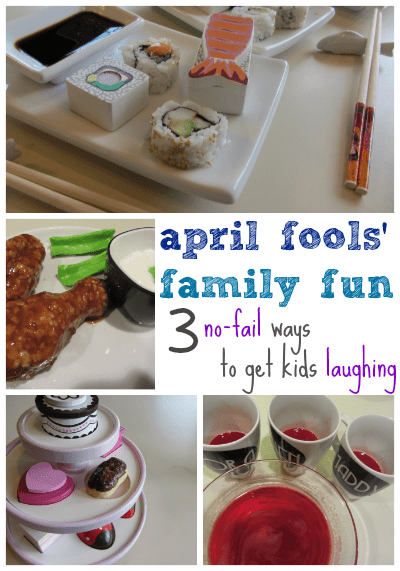 I’ve always found April Fools’ time a great excuse to sneak in a few extra laughs, some silliness, some second-glances, and some smiles.  I’ll even take eye-rolls if it comes with a crooked smile.

This year is no different.

I really just focused on food this year, and with the help of some new
Melissa and Doug Sushi Slicing Play Set – Wooden Play Food

and Sweet Treats, with some creativity and super-silliness, I’m pretty sure I’ve found 3 no-fail ways to get my kids laughing.

3 no-fail ways to get any kid laughing.

I’d even say we’ve got 3 no-fail ways to get the prankster laughing, and as long as someone’s laughing, it’s all good.

From breakfast through bedtime, April Fools’ Day can be a laugh every time you turn around.

(Just watch your back–it’s April Fools’ after all.)

It’s about keeping life light, not being serious all the time, and having some fun. Even if kids do double-takes, give these tricks a second glance, or chuckle even a little–it’s a win.

For me, as far as April Fools’ is concerned, it’s about trying.

Here are our 3, no-fail ways to get our kids laughing–

1.Real Food or Not? Let your kids figure it out!  Maddy, Owen, and Cora may not have been totally tricked with I substituted real food for some of their favorite Melissa & Doug toys, but the expression on their faces was priceless when I tried to pull this on ’em. 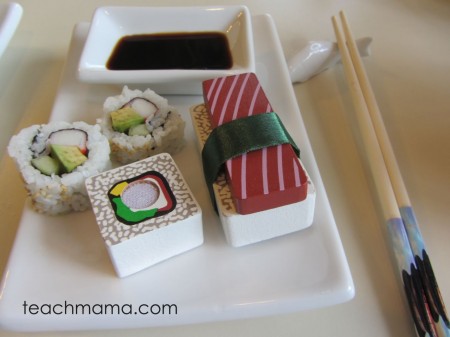 Lunchtime sushi sound indulgent? Not if you grab a pack or two at the grocery store while you’re picking up some last-minute things.  It’s actually pretty affordable–and healthy. And my kids totally dig it.

And when you substitute some play slicing sushi along side?  It’s almost pretty enough to eat. 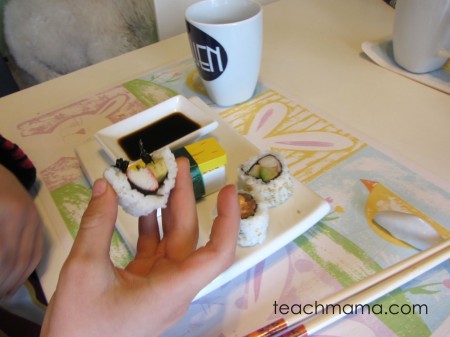 What did Owen pick up next? That sashimi? 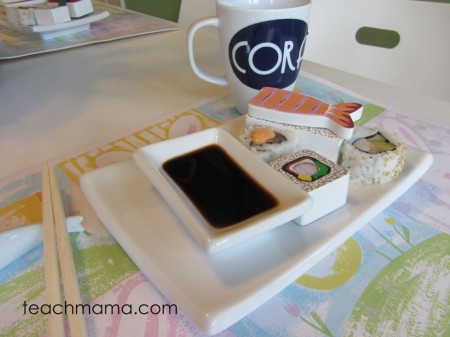 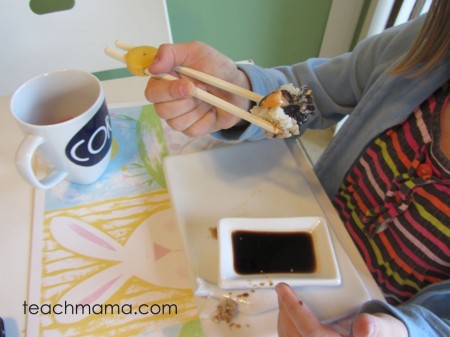 We went a little sweet-happy for a family gathering this week, but before we packed up our little familia in the ole van, Mom played a few little tricks on everyone. 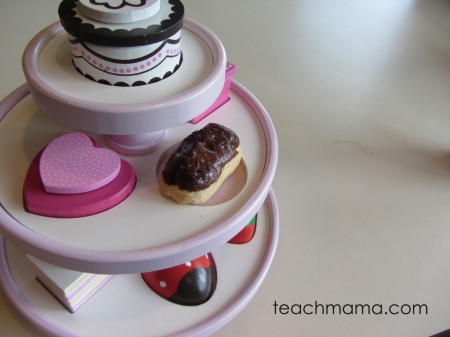 So pretty.  And looks so tasty! 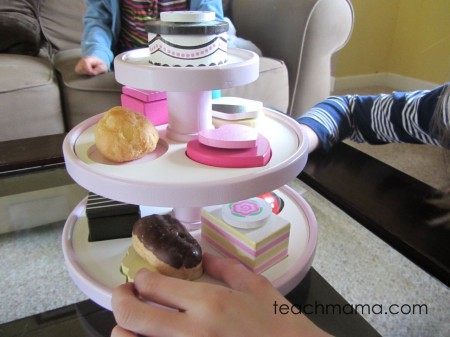 I set the Sweet Treats Tower on the table and the kids descended upon it in no time flat.

And when word got out that there were real sweets on the tower? It was all over. 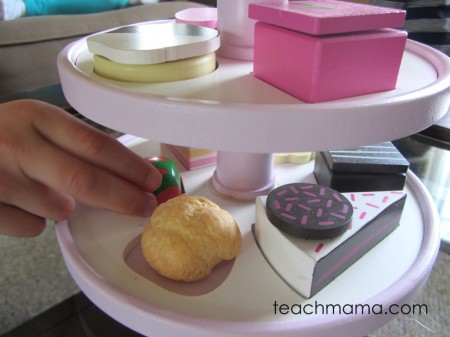 Awwwwh, Owen thought the strawberry was real!   Got him!

No, but really! Please help me get this tray of sweets ready for Grandma’s house?

I asked Maddy to wrap it before we left, and she gave me a good Moooooom! 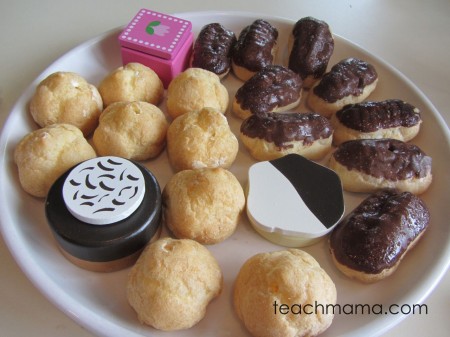 With the help of one of my favorite family magazines, I found this idea totally silly and really do-able.  Lucky for us, we had all ingredients on hand.  And especially because my husband’s been home for Spring Break, this will make a fabulous April Fools’ Day lunch! 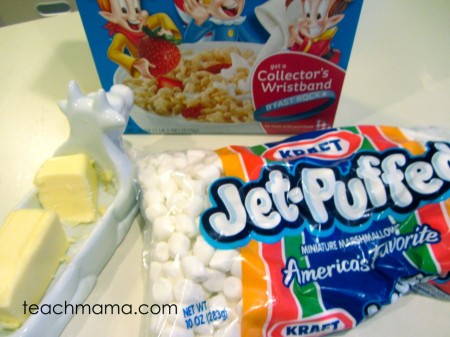 Step 1: prepare Rice Krispie Treats, just the normal recipe.  I have made them for so many years, I know it’s 3 Tablespoons of butter, the whole bag of marshmallows, and then Rice Krispies to taste.

I usually do about a 1/2 a cup less Rice Krispies than the recipe calls for so that they’re extra soft and chewy. 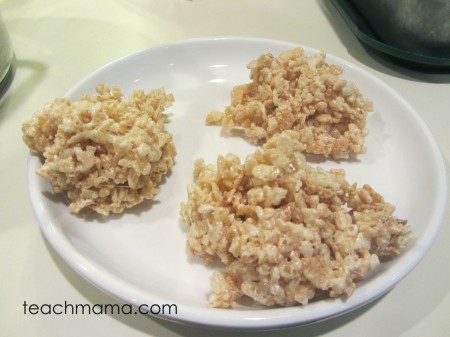 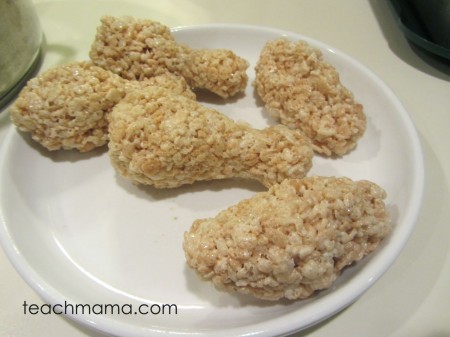 Step 2: Form softball sized clumps of Rice Krispie Treat.  And then comes the real fun–forming the treats into chicken wings.

I made three drumsticks and three wings, squeezing the Krispies tightly because I wanted them to be heavy enough to really feel like wings. 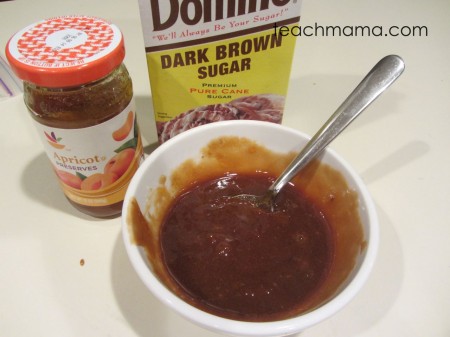 Step 3: Create the ‘wing sauce’.   I used 1/2 cup of dark brown sugar and 1/2 cup of apricot preserves.  I microwaved it for about 45 seconds so that the brown sugar dissolved.

Then I covered the wings in sauce.  This sauce was so sticky, it wasn’t even funny.  Well, it was kind of funny. 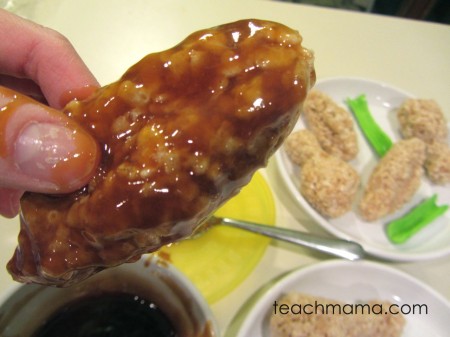 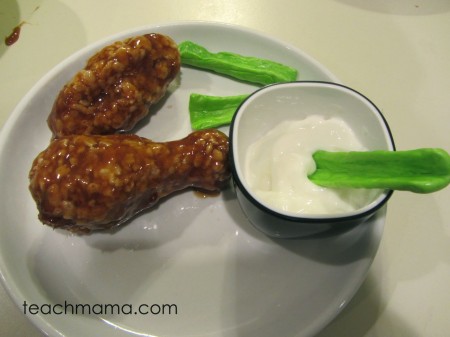 Step 4: Make the celery and bleu cheese.  I used Laffy Taffy, which was also so totally sticky, but it was easy to mold. my third one was a little rough looking, because my fingers were sticky, but I think it looks fine.

I covered this with foil and plan to ‘sauce’ the ‘wings’ just before lunch on April Fools’ Day. Watch out, family!

3.  Googly Eyes: I can’t get enough of these. They make me laugh so hard. 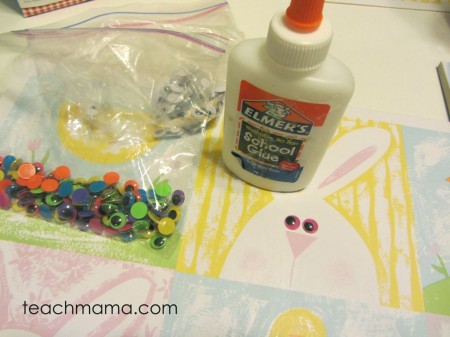 I put my husband to work, adding sets of googy eyes everywhere, just like we’ve done before.

And just like the kids totally love. (Not really.)

But this year, since I was in the Rice Krispie Treat-making mode, I whipped up some real looking eyes that will stare out from the kids’ cereal bowls at breakfast.

I was going to make real googly eyes that the kids could eat!  Eat! 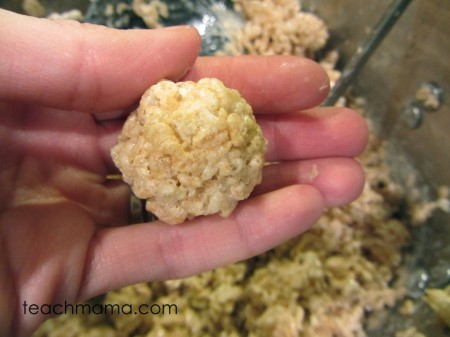 I formed tight little Rice Krispie balls that will function as our eyes, and then I melted white chocolate.

I dipped each ball into chocolate, because eyes are white, right? 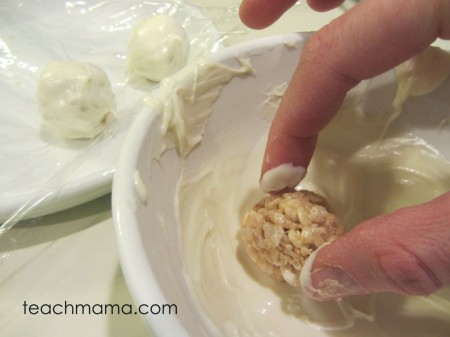 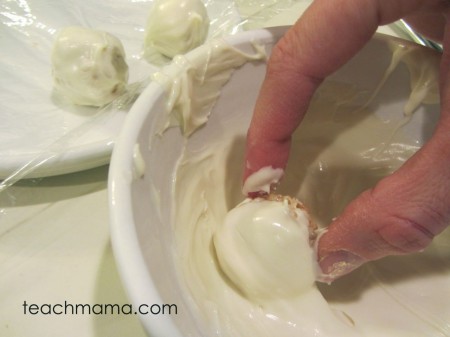 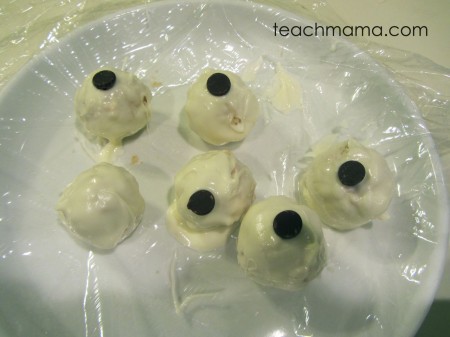 And then I added a dark chocolate chip to complete the eye. I really smashed it down so it would dry in the melted white and stay put.

I put them on a plate to cool.

Then into cereal bowls they went–ready for breakfast in the morning. 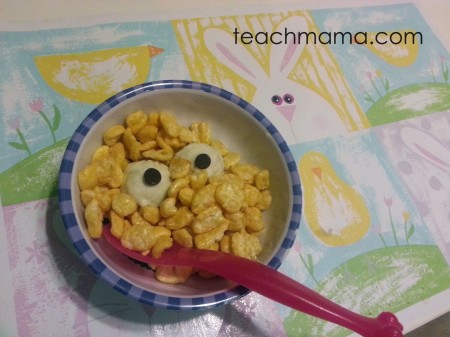 When Maddy, Owen, and Cora wake up, I’ll add a little cereal on top, bring the bowl to the table, and see what they do!  Hee-hee! I can hardly wait! 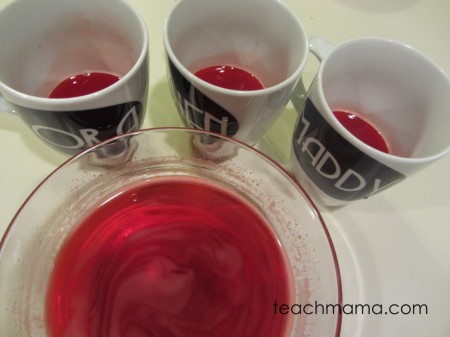 An oldie but goodie–Jell-O in juice cups.  We have a cranberry mix juice on hand, in our fridge, so I prepared red Jell-O. I just made a layer on the bottom of their cups, and when we pour juice for them in the morning–BAM! It’ll be stuck!

And really? That’s it for this year. I can’t take much more, really, or the fun will do me in.

What’s your favorite April Fools’ Trick? Do tell! I’d LOVE to hear it–and I am already gathering ideas for next year!

fyi: I wrote this post as part of the Melissa & Doug Blog Ambassador program.   Thank you, Melissa & Doug, for creating toys that keep kids and families smiling–April Fools’ Day or any day!

how to teach the easter story to kids: resurrection rolls
Next Post: how to use iPad notes for quick, fun interviews