September is a month of celebrations! 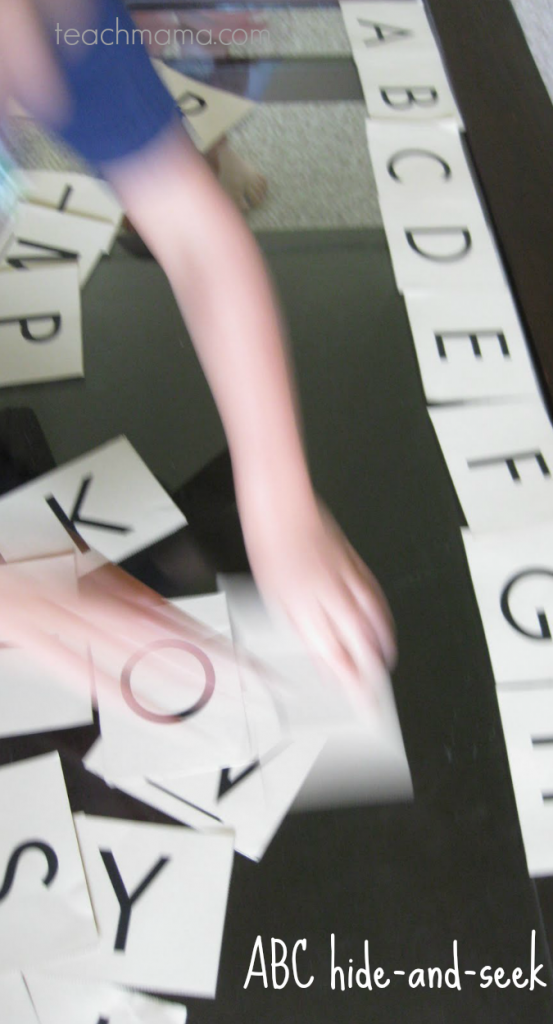 And finally, after 41 weeks (and a day or two!), our newest family member decided to join us–my sister and her husband had their first bambino this week, and we’re over the moon excited!

So between soccer practices, playdates, back-to-school nights, tutoring, and a recent trip to and from PA to welcome this sweet bundle to our family, we have been sneaking in a bit of learning, trying some new games and re-visiting some old ones.

To pass the time before I could jump in the car to see my sister and new nephew, Owen, Cora, and I rocked an oldie but goodie: hide-and-seek abc style. And. They. Loooved. It. So cool to sneak a little bit of learning into even a short span of time!

I pulled out the box of totally mix-matched games and resources and held up the bag of alphabet cards. I said, Oh my gosh! ABC Hide-and-Seek! Who wants to play this in our new living room!? (Not really new, but just re-arranged, so kind of new to us…). 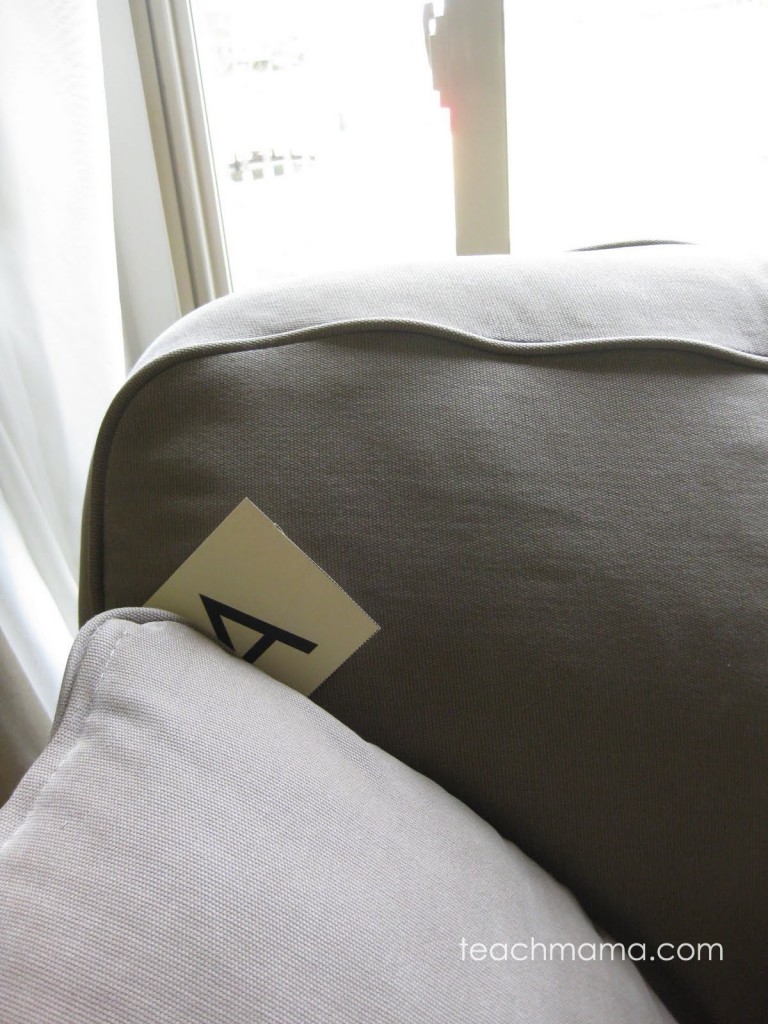 The letter ‘A’ gets comfy in our sofa.

Owen and Cora both jumped up and yelled, Me! I do! (And I am so not kidding. These two will play any type of hide-and-seek game I throw at them. It’s a riot.)

So I said, Okay, you two hang out in the red rug room until I hide them. I’ll call you when I’m ready.

I hid the ABC Cards which you can download as a pdf if you’d like. Information is below:

(Or if you want some fancier ABC Cards, check out my Sticky Fingers post.) 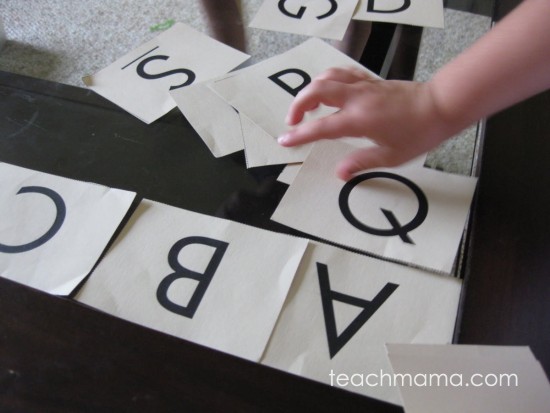 They waited. And I hid.

And when they arrived, I gave them the usual instructions: The rule is that you call out the letter as you find it. Yell it loudly, and then hold onto it tightly. When all the letters are found, we’ll put them in alphabetical order. Ready? GO!

So they ran around our new (newish) living room, finding letters and yelling their names. And when we thought all of the letters were found, I said, Whoever has the uppercase ‘A’ put it here, and let’s get these letters in order! 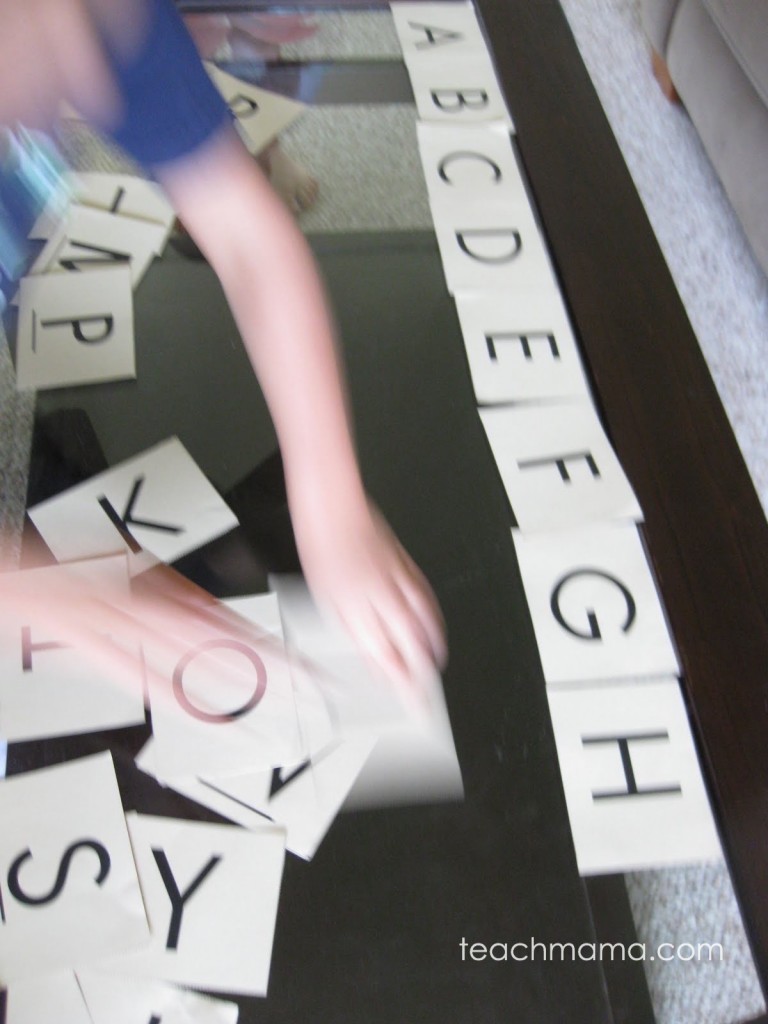 Owen plopped down the ‘A’ and we went from there. Owen and Cora both spread out their ‘found’ letters in a big pile, and after a few runs through the ‘ABC Song’ they worked together and put the alphabet in order.

(Without the ‘U’ which we absolutely could not locate until after dinner when Owen found it under the leg of the table–I’m such a good hider!) 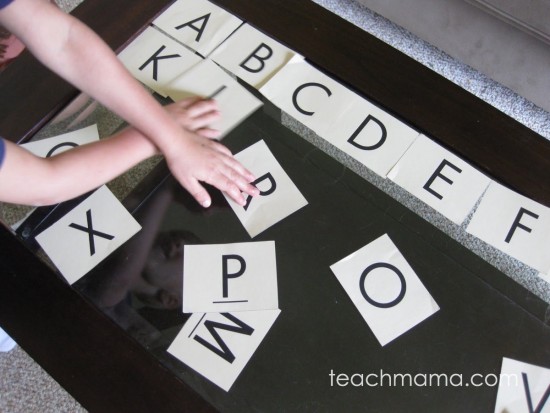 Owen does some quick re-arranging to get the ABC Cards in order!

And in ten or so minutes, it was over. Just a teeny little something to play with the alphabet before books and rest and before the rest of our day.

I am finding that I need to do more to keep Cora interested and engaged than I ever did with Maddy or Owen. Usually when we’re up and moving, she’s game. Or sometimes if she’s tired, our activity needs to be really low-key and require next to no physical activity whatsoever. Depends on the weather. Gosh, this one keeps me on my toes!
When I first began writing teach mama, Maddy had just turned 5, Owen was 3 1/2, and Cora was almost 2. Life was busy, and I was only stepping into sharing the way I added a little bit of learning into our every day. Now, with Owen having just hit the big #5 and Cora 3 1/2–and Maddy a solid 6 1/2–I’m going to start pulling out the old tricks 2.0. And why not?

We do a whole lot over here that I don’t share. But lately I’ve noticed we have been revisiting many of the super-fun games Maddy, Owen, and I played way back when Cora was an everyday napper and the three of us had that guaranteed quiet time to hang out, play games, and have fun learning without a toddler toddling around.

So I’m excited in the next few weeks and months to do a bit of looking back, linking back, and re-vamping some of our faves and sharing our sneaky learning over here. Hooray!
Want a few more alphabet activities? Check out: