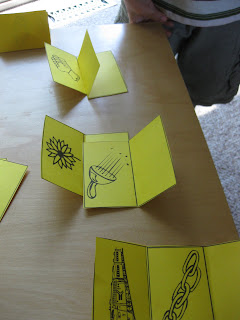 It’s no secret that digraphs and blends are tough for some kiddos to enunciate and hear. These tricky, unique sounds are difficult for little mouths to create, and it’s known that speech sounds come with time.

But if we can find reasons to say words with these sounds, play games with the sounds, and give our kiddos opportunities to practice them, it’s a win-win! (And some seriously sneaky learning. . . )

My two little sweets, Owen and Cora, both have enunciation struggles that I never experienced with Maddy. Although Maddy was over 2 years before she started to talk–seriously!–the words she spoke were as clear as day.

It was like she was waiting until she could say the words correctly before she’d say them at all.

Owen spoke early and quickly, using any word he could any way he could, and to this day, he still has a difficult time with a handful of tricky sounds. Cora followed in Owen’s footsteps, trying to keep up with everyone else language-wise. She’s only three, sure, but contends with a little lisp and often exchanges her r’s for w’s.

My only point in sharing this is to explain why I have been searching for a few new games to get us playing with those tricky, tricky digraphs and blends. This one is a winner. 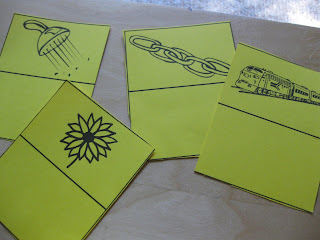 I used the cards from the Change My Word Game and switched things up a bit, as I know that Owen and Cora like to get up and moving, and they love hide-and-seek. 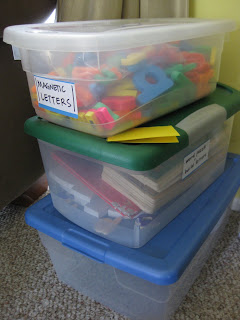 So after lunch, I said, Who’s up for a new hide-and-seek game? In this one, you have to find secret rhyme cards, though, so it might be too tough for you two. Should I put it away and try it another day, maybe, or are you ready for it today?

They convinced me they were both ready, so I told them what to do: I held up a folded yellow card, and I said, There are a bunch of yellow cards hidden in the living room. You have to find a card, open it, and then find its partner rhyme card. Tough! I know. But each card has a pair. Ready? Find ’em!

Owen and Cora both sped around picking up the folded yellow cards, not opening each one but rather gathering all they could at once. No biggie. (Not what I intended, but it seemed to work for them.)

When they had found all of the cards, I said, Okay, bring all of the yellow cards here, and we’ll find the rhyme partners together. 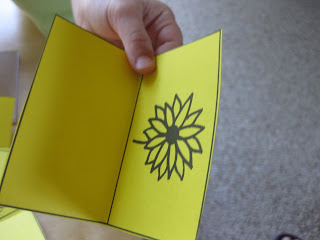 They unfolded the cards, and they identified the pictures (and here’s my big mistake–I should have said the names of all of the pictures before the cards were hidden!). The pictures could have been different things; Cora called the ‘train’ a ‘Metro’, the ‘shower’ they called ‘water’ and the ‘chick’ a ‘bird’. Not the end of the world, but it may have made their rhyming easier. 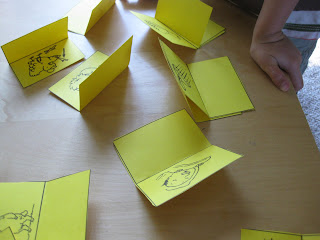 The game cards were found, unfolded, and matched!

Eventually all of the cards were matched. We read through the rhymes together, and they asked to play again. A good sign for a new game, right? Yes!

My goal for this game was not to force Owen and Cora into correct pronunciation of words they already have a difficult time saying; rather, my focus was really just to give them a chance to hear the sounds in words, play with the sounds a bit with rhyming, and give them the chance to try to say the words if they wanted. That’s it. And I wanted it fun, I wanted them up and moving, and I wanted them to want to play.

When Owen or Cora–or any little person, for that matter–mispronounce a word, I don’t make them try and try and try again until they say it correctly. I simply repeat the word the way it should be pronounced in a natural paraphrasing of what they just said.

And if the time’s right, if the kids are in the mood, and if there’s no audience, I’ll maybe explain how they can make the sound if they want to try it. For the ‘th’ sound, Owen and I have talked about where the sound is formed–with the tongue flat on his top teeth, not with the tongue on the roof of his mouth where the ‘s’ is made. And if they get it, great; if not, no worries.

We’ll be doing more blend and digraph gaming in the next few weeks. . . any great ideas? Please let me know!

abc hide-and-seek 2.0
Next Post:just 1 book: little house on the prairie