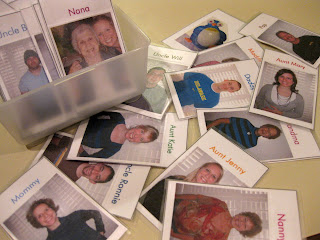 I’ve been a woman possessed ever since I watched Maddy and Owen play Old Maid with my parents back in the fall. Such a simple game. And the kids loved it.

But wouldn’t it be sooo much more fun if, instead of all those funny-looking cartoon faces, my own funny-looking family members were on those cards?

So I’ve been doing some secret crafting for the last few nights, and it’s been remarkably easy–it’s just that the printing, and cutting, and gluing, and contact-papering has been time consuming. But it’ll be worth it once my kiddos see their game under the Christmas tree! 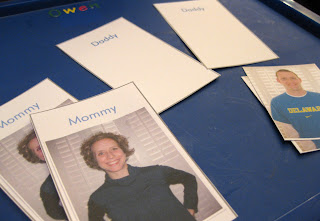 Then I created a verrry simple playing card template with every person’s name on it. That template can be downloaded and modified to fit your family’s needs by clicking on Family Playing Cards. 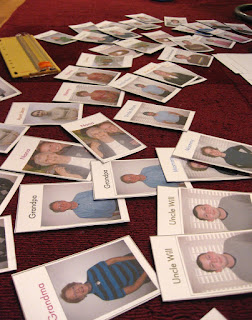 I printed everyone’s picture twice, using the ‘wallet’ size option, and they fit perfectly on the cards. I used cardstock for both the pictures and playing cards.

I cut out the cards and pictures, then glued the pictures onto the cards. I then wrapped the cards in clear contact paper, and I was finished.

If we hadn’t just had a million snow days and my husband could have made it into school, he would have laminated everything for me. Plan B was to use clear contact paper, and it worked out fine.

What I realized–as I created these–was that they could be used for Old Maid, which was my original plan. I made a funny winter penguin (from last weekend’s newspaper) our Old Maid card. But take away the Old Maid card, and we could play Go Fish! Seriously.

Put the cards in rows, face down on the floor, and we could play Memory! All with the same cards. Just like the day I realized that the A, B, C Song was the same tune as Twinkle, Twinkle Little Star and Baa, Baa Black Sheep, I wanted to dance around and sing. Well, not really. . . but I was pretty excited. 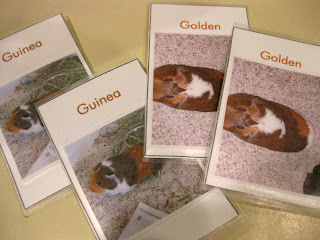 Of course Golden and Guinea were in the mix–
they’re part of our family, too! 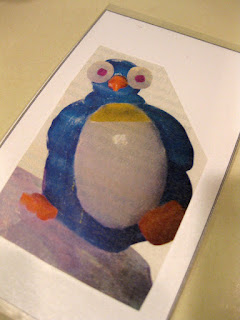 I added the rules to Go Fish, Old Maid, and Memory at the end of the pdf for Family Playing Cards. There are so many variations of each game that it was tough, so I just decided to focus on the ways we most often play.

My goal is that by playing with these cards Maddy, Owen, and Cora will not only get a kick out of seeing their cool family members’ faces on each card (as well as their own sweet smiles), but they will also become more familiar our family members’ names.

Not that they don’t already know them–of course, they do–but I want Maddy to learn every person’s name so that she can write them by memory, I want Owen to be able to at least recognize and read the names on his own, and I want Cora to start to learn the letters that begin each name–that Grandma’s name begins with a ‘G’, Nanny’s begins with an ‘N’, and so on.

I was sure to have everyone’s name printed clearly on the top of each card for this reason.

And that’s it for me for a few days; I’ve got a ton to do to prepare for the holiday, and I’ll be back again after Santa stops by–Happy Holidays and happy game playing!!