new for us friday: cue sticks (and giveaway!) 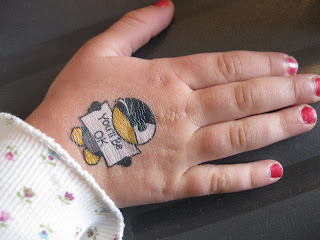 Nope, I’m sorry, all you pool playin’ teach mama readers–I’m not talking about those cue sticks.

This week, we had a chance to try out a different kind of Cue Sticks–an awesome, new little gem, thanks to a pal here in the DC Metro area who invented them. I’m talking about Cue Sticks Motivational Stickers and Temporary Tattoos.

I am a huge fan of happy, little reminder notes, and apparently so was Nancy Shapiro, the owner and creator of Cue Sticks. Except that Nancy’s super-motivated and took her idea to the next level, creating temporary tattoos and stickers with smart, thoughtful, and above all, helpful, reminders.

I couldn’t be happier that we had the chance to try them out (and I have two sets to give to you!) for this week’s New For Us Friday. Here’s why: 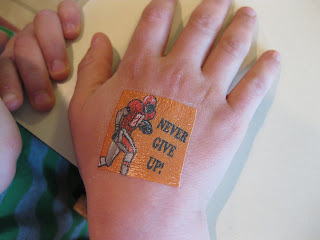 I said, Lucky us! We have something new to try out this week–tattoos!! But these aren’t like the tattoos that we usually wear. These are like little note tattoos–each one has a message especially for you. 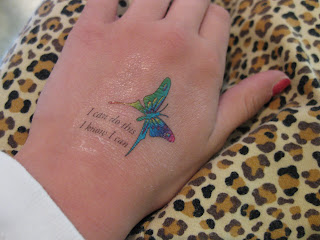 The messages in my set were seriously perfect for where our kids happened to be at the time.

To Cora, I said, Cora, This tattoo is for you. It’s a little penguin with a message that says, ‘You’ll Be OK.’ So when you feel scared of the shadows in your room at nighttime, you just look at your hand and read the message and you’ll be okay.

Her eyes brightened, and she said, It’s for me? Okay, I’ll be okay. It’s good.

I gave Owen the tattoo that said ‘Never Give Up‘ with the football player on it. He loved it. He had tee-ball that afternoon, and the practice followed a recent game where he needed to use the tee more often than he wanted. (They like to have the ball pitched, and they use the tee after five missed pitches.) He gave me a good, Yeaaaaah, never give up! and ran around for a little, looking at his hand and saying in his toughest little-guy-trying-to-be-a-big-guy voice, Never give up!

Maddy’s tattoo said, ‘I can do this, I know I can,‘ and this day followed the one and only day all year that she gave me a tough time about going to school; she said she was tired, that she wanted to play at home, and that she wanted ‘to sleep on’ instead of getting up. Strange, out of the blue, and overall a really tough morning for us. Maddy loved her butterfly tattoo and must have said, I know I can do this! half dozen times before we left for school.

I’m guessing the stars were aligned and that we did something right at some point in time to have three little ones’ Cue Sticks tattoos jive perfectly with their little lives. I’m also pretty sure that these sayings are open-ended enough that they’ll ‘fit’ just about any situation you need. (Smart thinkin’, Nancy!) 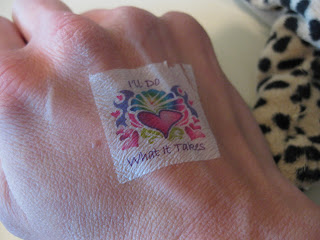 my very helpful tattoo, on my very old-looking hand,
next to a stuffed cheetah–not Maddy’s pants

I put on the I’ll do what it takes tattoo, and believe it or not, I did look down a few times that night when I was out at Starbucks on a writing-rampage for some freelancing work I was trying to finish. When my mind strayed, and I wanted to start Facebooking, Tweeting, or checking email, I looked at my (oh my gosh, ridiculously old-looking) hand to get me back on track.

Cora’s tattoo got crumbly after about three days, and luckily we had another just like it to put on, because she requested it. She wanted another, and (please no eye-rolling!) by the end of the week, she was not waking us up at midnight to say she didn’t like the shadows in her room. Seriously.

I love these Cue Sticks. I really, really do. I like them so much I wish I would have invented them or that I could at least say I thought of the idea at some point in time. Because it makes sense–little reminder notes help, little kids (okay, and most adults) like tattoos, so why not throw them together?

Cue Sticks come in a bunch of other sayings: move more; I ROCK; I’m a Sweet Big Sis; Don’t Pig Out; kiddie food not for adults; O-Yeah!; and more. There are also a handful of other products to help keep you focused–stickers to put on snack food and water bottles with motivational 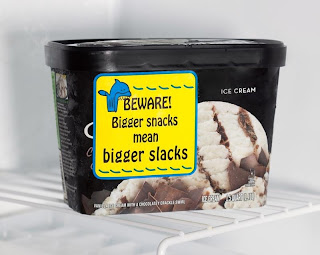 For this great little Cue Sticks Giveaway, we’ve got two packs to give away to two different teach mama readers:

To win, leave me a comment saying which pack you’d like more and why you think you need it. That’s it. Contest closes next Friday, 5/28/10, at midnight.

Take a second to check out the Cue Sticks website to see the other products they’ve got. And many, many thanks to Nancy for sending a few packs of Cue Sticks across town for us to try, giving us two packs to share, and and for allowing me the opportunity to spread the word!

So that’s this week’s New For Us Friday–just one way I try to throw in a little something new-for-us each week. . . or as close to weekly as I can!

fyi: My opinion was in no way influenced by our friends at Cue Sticks; it was, however, influenced by three tiny tattoo-wearers and my own tattoo-wearing experience. I received no monetary compensation for this post, but our tattoos and stickers were kindly given to us by the company.