Ever since Owen learned how to use it, he’s been unstoppable.

At first, using the hole punch was really difficult for Owen; hole punching requires muscles that super-important in developing that tough tripod grip, and for some little ones, these muscles really need to be worked.

But we fell into some cool ways of getting him punching to make it more fun. Here is just one of them:

Instead of using individual pieces of construction paper for Number Boxes, we used the huge rolls of paper that I totally heart instead. I rolled one out the length of the room and numbered from 1 – 15. I brought out some Foamies, and Cora and I counted objects and then placed them under numbers 1 – 5, until Owen the hole puncher stepped in. 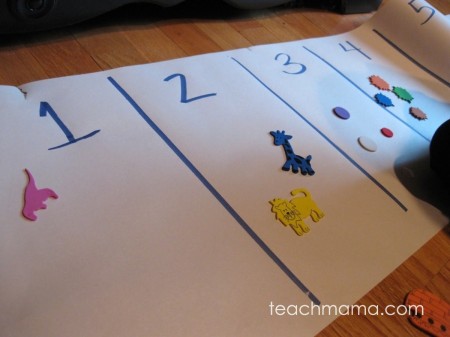 Our loooong sheet of number boxes

I noticed that Owen had punched around the edge of a whole piece of paper, so I cut the paper into halves, then quarters, and then halves again, so that he ended up with lots and lots of tiny papers outlined in holes. 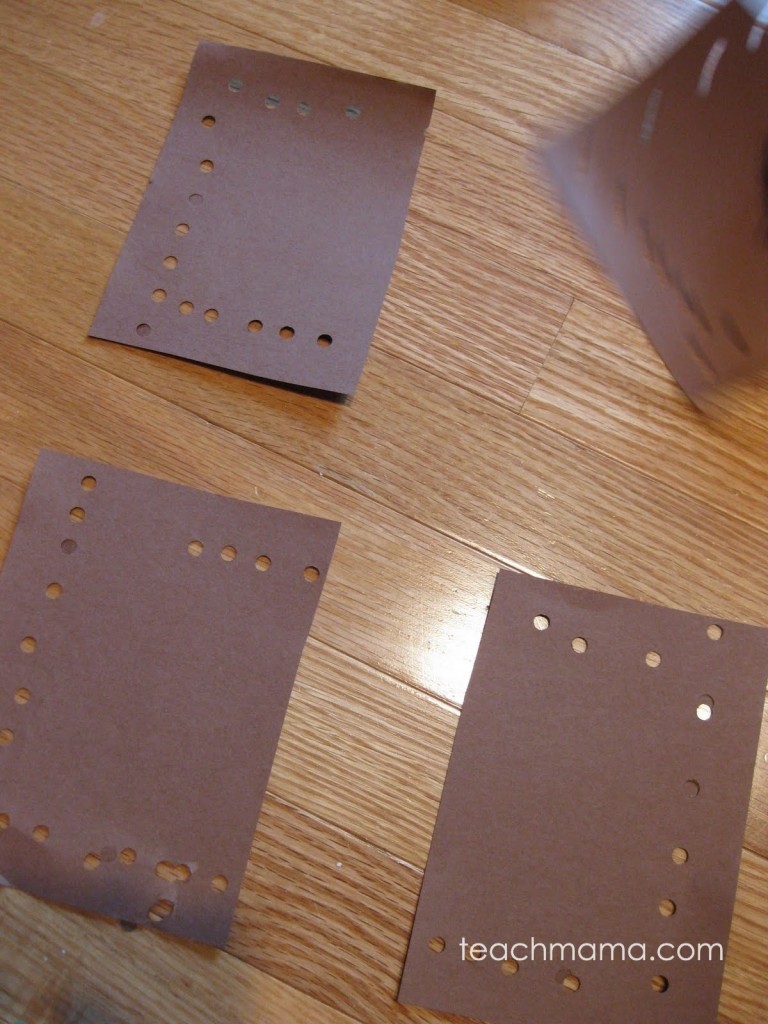 Then boom! Owen decided to merge Number Boxes with his happy hole punching, when he said,

Mommy, look! I can make six holes in this paper for number six!

I said, Oh my gosh! What a good idea! Owen, you’re really using your brain. Why don’t you put your paper with six holes right where it belongs on our chart?

What other numbers do you want to help Cora with? Can you punch eight holes? Nine holes? 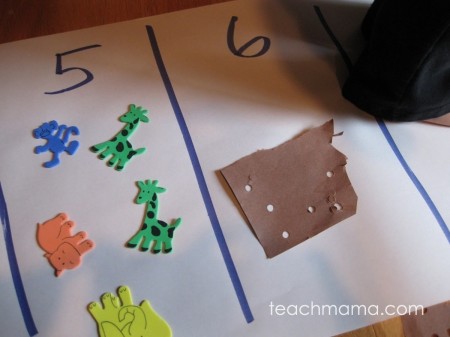 He punched a piece with eight holes, and then we decided to empty his little hole punch. With a handful of tiny dots, he counted out fifteen and put them under ’15’ on the chart.

It was a very cool way of combining what Cora and I were doing–math and counting–with what Owen was practicing–fine motor skills. Hopefully in the next few days I can come up with some other ways of using Owen’s many dots, other than for confetti. . .

All of the fine motor skill activities we do, like cutting with scissors, using chopsticks, stringing beads, playing with pop beads, doing puzzles, or anything that forces our little guys to use their fingers and hands is extremely helpful in setting them up for success later.

These are just the tip of the iceberg–there are dozens of ways of working our kiddos’ fine motor skills. Feel free to share yours!

Previous Post: « new for us friday–kaa-chew! news on the flu
Next Post: let’s get to the bottom of sounds »