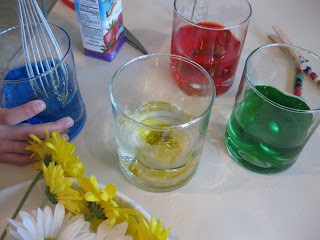 Part of our flower fun over the last few days involved our experiment for the Virtual Science Fair which was a lesson in backyard fragrances. But later that afternoon, I couldn’t help playing around with colors and flowers like I did so often when I was younger.

So with some of the cuttings we did of the bigger flowers, and with pieces from a bouquet the kids picked up for me when I was really, really under the weather last week, we set up an opportunity for Maddy, Owen, and Cora to see just how flowers absorb water. 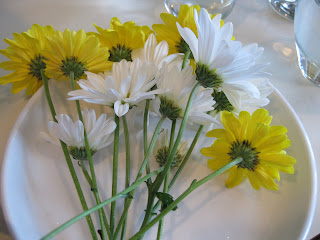 our flowers, waiting for color

Maddy used the whisk to dissolve the food coloring, and then we added flowers. The daisies had been around for a while, but the tulips and daffodils were right outta the garden. 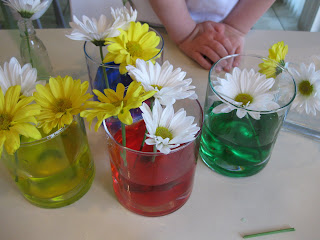 We added the flowers, and then we waited. 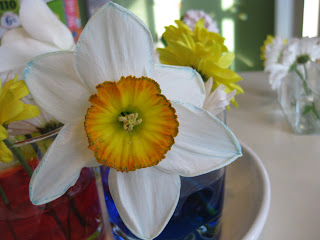 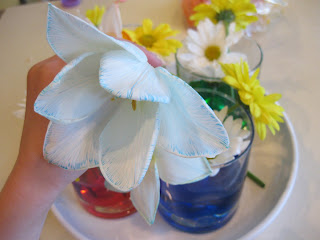 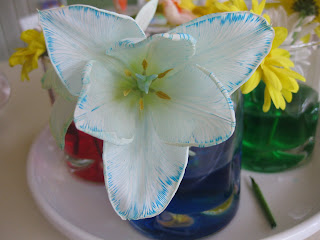 And about four hours later (yes, there was a lot of stuff shoved in between this little experimento), we spotted tiny bits of blue around the edges of the tulip and blue around the center of the daffodil.

We didn’t check the flowers again until breakfast the next day.

Finally, the next morning, we noticed that our tulip had really absorbed the blue but that the red really wasn’t that noticeable. We also observed that the older flowers didn’t absorb as much as the more fresh flowers.

We didn’t get into the science of it all or the specifics about why it happened; I really just wanted Maddy, Owen, and Cora to see how flowers absorbed (or ‘drank’ as they said) water. We’ll try this experiment with Queen Anne’s Lace which is found all around Maryland and Pennsylvania come summer because that’s what I remember using as a kid, and it is a really simple–but worthwhile–bit of science learning for our little ones.

And that’s it. We’ve been enjoying the sunshine, playing lots with our new pooch, and trying to get back to Healthyville, which really hasn’t been easy for us. But the rain is coming, and hopefully it’ll wash away this pollen and our colds.