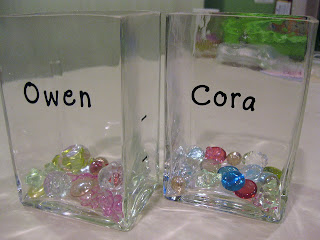 Back in the end of May, our little familia was experiencing a rough patch. Owen finished preschool a few weeks before Maddy ended kindergarten, Cora’s playgroup was still meeting but Owen’s soccer wasn’t over. The pool was open but school was still in session. It was strange.

The schedule we had grown accustomed to for months and months was changing, and we were in flux. And it turned into a big, ugly behavior rut.

I was raising my voice more than I’d liked. Maddy, Owen, and Cora were bickering more than they needed, and we all were just drifting between schedules–waiting for some sort of new summer normal to come in and sweep us into regularity and happiness. (Sigh.)

But I knew things wouldn’t level out again for some time, so I needed something to rope us back in before we were cranky, tired, and unfocused all of the time.

Luckily, I ran across something in the June/ July issue of Family Fun that has helped to put us back on track, and we’ve been using it for well over a month with great success–Our Gem Jars.

I bought black letter stickers so I could put each family member’s name on a jar. Maddy, Owen, and Cora each have a jar, and there’s even one for Mom, Dad, and Brady.

After I had assembled all of the ‘pieces’ of this Gem Jar experiment, my husband and I called a Family Meeting just like we do when we have to discuss anything new.

I said, Daddy and I are excited to tell you about a new way we’re going to reward the great things we see you guys doing every day. These are your new Gem Jars, and these are the gems. Notice there are big gems and little gems? I’ll tell you why in a second.

See these two lines on the side of everyone’s jars? There’s one at the top of the jar and one in the middle. When your jar is filled with gems, you will earn a reward. Half-full jars will earn small rewards, and bigger rewards will come when your jars are totally full of gems. And imagine how beautiful your jars will look when they’re filled! 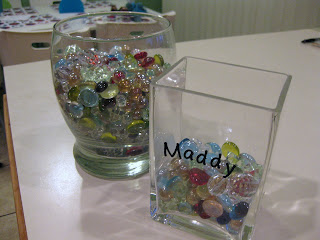 I took out a piece of paper and we all brainstormed some ways that we all could earn gems. We came up with:

We explained the difference between big gems (a pack of fancy diamond-like glass beads I found at the store near the wedding supplies) and little gems (a mix of the smaller glass beads I mentioned above). Big gems could be earned for going above and beyond, but they were very special; it might take time to earn those. 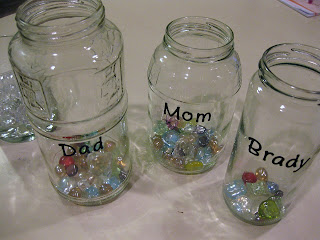 We all also discussed rewards for half-full and full jars, and we wrote them on a list. We decided that a trip to Rita’s, a special trip somewhere with Mommy or Daddy, being able to choose dessert one night, a chap stick (for the girls–I know. . . ), a new book, a pack of silly bracelets, or even a trip to the toy store with a $5.00 or $10.00 limit might be good things to work toward.

The kids seemed excited, and so were we. Anything was better than what we had, and we were all ready for a change.

Is it perfect? Absolutely not. Is it fool-proof? Nope.

But what it does do is give everyone something to work toward and it keeps us focusing on the positive: Let’s get this room picked up so that I can throw two gems in your jars! or Thank you, Owen, for letting Brady outside. Put a gem in your jar! or I love the way you’re speaking to each other and sharing toys! Three gems for each of you!

It’s a riot to hear them actually notice positive behavior and say to each other, Maddy, you were nice to help me. I’m giving you a gem, or Mommy needs a gem! She made us a great dinner (okay, so they said that once, but I’ll never forget it!).

On tough days, when kids are arguing, hitting, or are unkind, sure–we count 1, 2, 3 or use time-outs if we need to. But we also remove gems from jars if we need to–if behavior is not what we expect. If they ask for a gem? No way do they get one! The sure ticket to not getting a gem is to ask for one.

In my book, it’s not bribery. It’s incentive, it’s recognizing and immediately rewarding the behavior we want repeated, and it’s simple. No points, counting, or record-keeping. Just beautiful jars slowly being filled with gems that represent love, generosity, kindness, and support. We won’t do it forever, but for as long as we need or want to and until the behavior is as automatic as breathing. Or so we hope.

Thanks, thanks, and more thanks to Malissa O’Brian for sharing her family’s idea on Creative Solutions in Family Fun! Love it–thank you, Malissa!

Previous Post:math in the kitchen with veggie kabob patterns
Next Post:we’re in family fun magazine!