how to teach kids to tie their shoes

home / Activities / foundations / how to teach kids to tie their shoes
4.1K shares

This Quick Trick is admittedly a work in progress. While Owen hasn’t quite mastered tying his shoes yet, he’s getting there. Slowly. 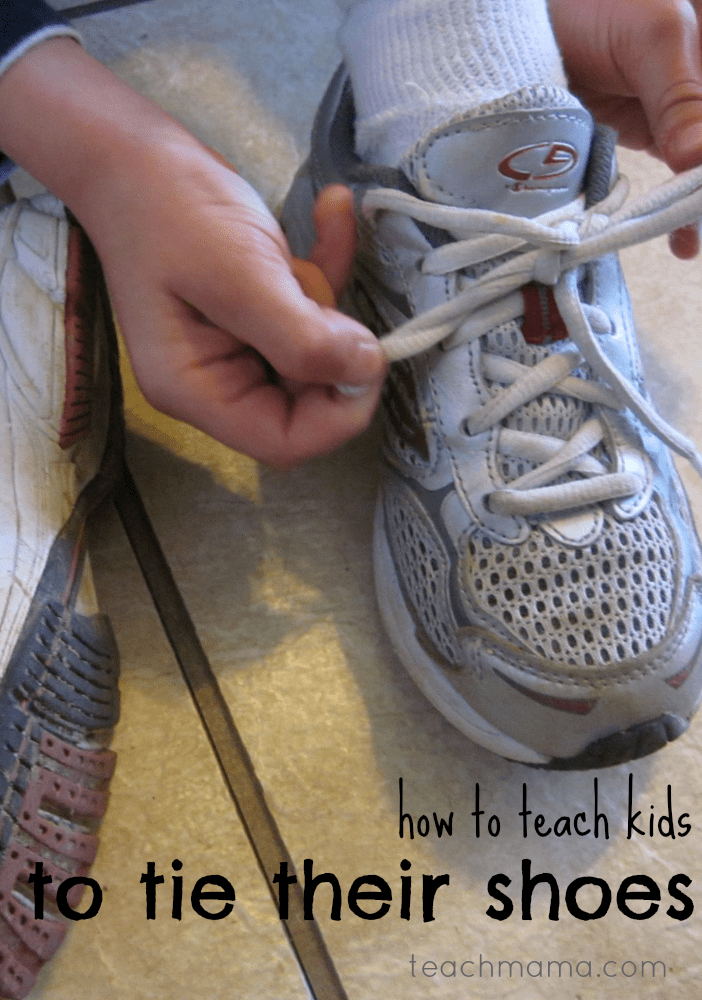 For many preschoolers and early elementary students, learning how to tie their shoes takes a simultaneous jiving of both fine motor skill readiness and cognitive readiness. Learning how to tie shoes takes a huge heap of concentration, and kiddos must be at a developmental stage where they are able to try, fail, try again, fail again, and re-try until it finally clicks.  That’s the hard part.

Oh, and they have to want to learn how to do it. If they don’t want to do it, forgettabout it.

That’s where were were last summer with Owen.  But now, he wants to learn, and seriously, just like potty training, I feel like I’ve got to jump on this train while it’s here. Or it might not arrive again until he’s in like second–or fifth–grade.

So when I was invited to participate in a Cardboard Box Creative Challenge this week, I knew exactly what we needed to do.  I  grabbed a small cardboard box, some ribbon, and a huge chunk of patience, and I set out to create a little something that I thought would help the O-Man learn to tie his shoes: A Shoelace Box.

Or, as Owen named it, Ribbon Rows.

How to Teach Kids to Tie Their Shoes: 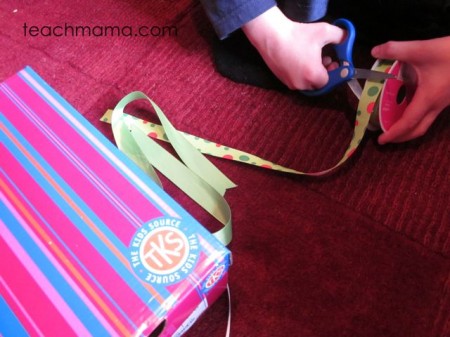 I grabbed a small cardboard box, a shoe box, and I gathered tons of ribbon and string from our ribbon bag.

I made several holes on the box: three sets of two holes, one inch apart on the top and two sets of holes on each side. 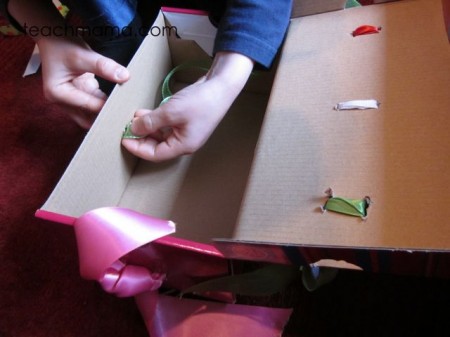 Owen threads the ribbon through the holes.

I wanted a variety of textures in the ribbons and string I chose so that some would be thick, some thin, some long, some short, some rough, and some smooth. 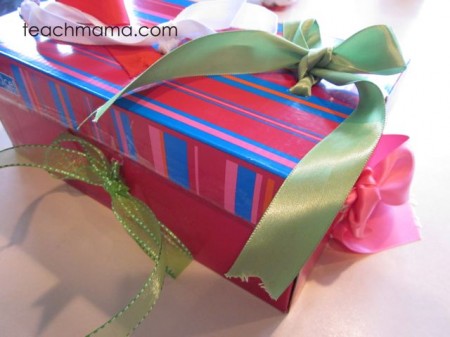 My thinking was that some would be easier than others, and whatever worked we’d go with.

I was also thinking that once he got the tying thing down pat, he could use the other lengths and textures to hone his new skeeeels.

We used the language that I had heard but was not taught–that each loop was a ‘bunny ear’, but that wasn’t sticking, so I moved to something that I knew would: swords.  I used the image of a sword fight, since I thought it would be more enticing than bunny ears. I was right.

Make one sword, then make the other. Then cross them. Bam! This guy ducks under, through, and PULL! 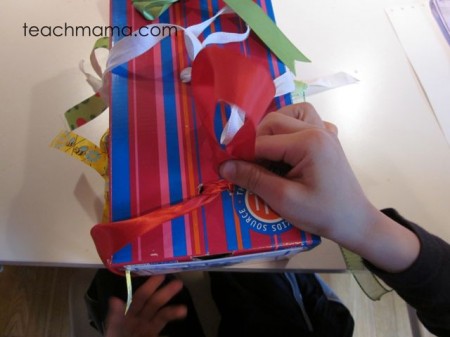 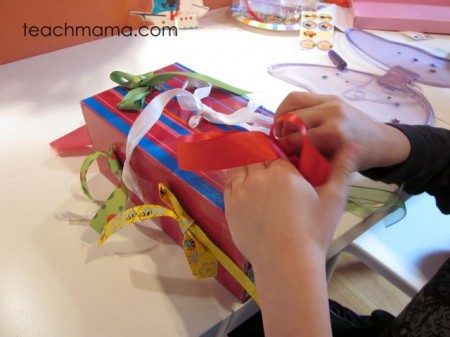 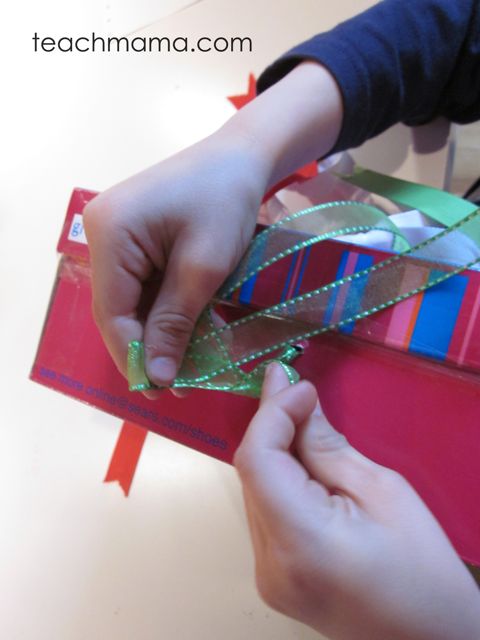 But it was frustrating, slippery, and challenging for him–even though his brain and hands seemed ready.

So we took some breaks, focused on his successes, which was the first part. He could totally complete the first step in shoe-tying; it was just the blasted bunny ear/ sword part that got him all jumbled up.

We took breaks, and tried and re-tried.  Rewarded and took deep breaths.

After a few days with Owen practicing on his Shoelace Box, I noticed he was still having a hard time with the second part of tying–the looping under and pulling through.

So I un-taped his box and took out the red ribbon on the bottom and the white ribbon in the middle; I tied them together so that one side was red and the other side was white, and the two-toned ribbon made a world of difference! 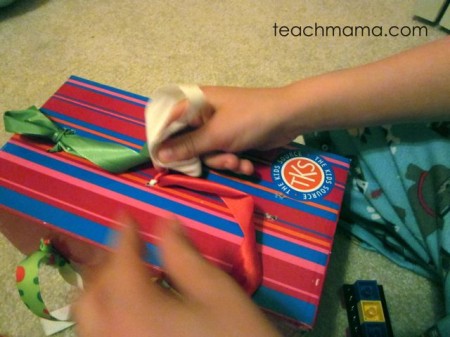 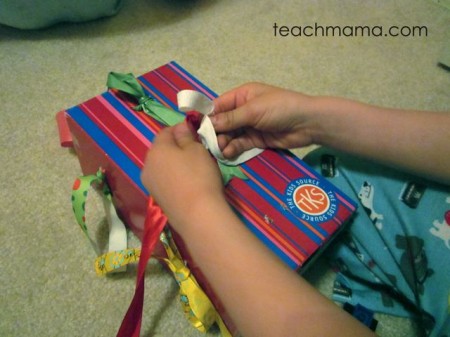 . . . and seems to have an easier time keeping track of loops and pulls. 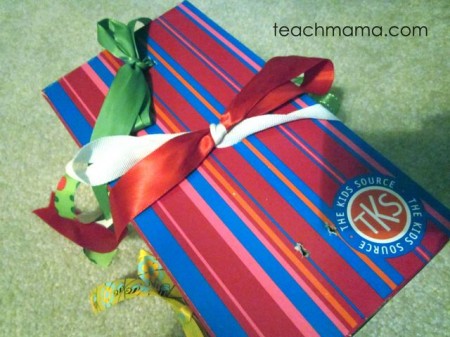 We figured out something that will work–and he wants to try to tie a few times each day. Some days we forget, and some days he’s not feeling it, but most days, he’s ready to practice tying his shoes.

Woot!  Now I have TWO kids who can tie their shoes in ONE house! I can hardly contain my excitement! 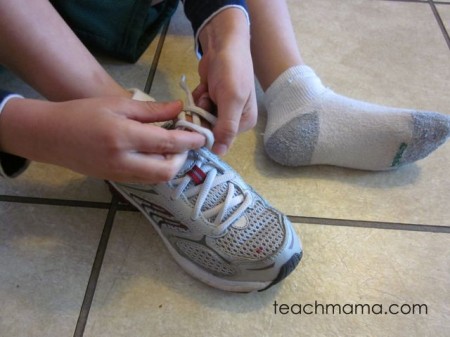 Want another few fun ways for using shoeboxes? Check out 2 Cool Ways to Use Shoeboxes or Learning & Fun with Recyclables!

Check out a few other posts that may help you develop strong and healthy habits for your family:

fyi: Some of the links in the post above are “affiliate links.” This means if you click on the link and purchase the item, I will receive an affiliate commission. Forever and always I recommend only products or services I use personally and believe will add value to my readers. I am disclosing this in accordance with the Federal Trade Commission’s 16 CFR, Part 255: “Guides Concerning the Use of Endorsements and Testimonials in Advertising.”  For more information, please see teachmama media, llc. disclosure policy.

learning during read-alouds: word consciousness
Next Post: happy mother’s day to you, and you, and you! »