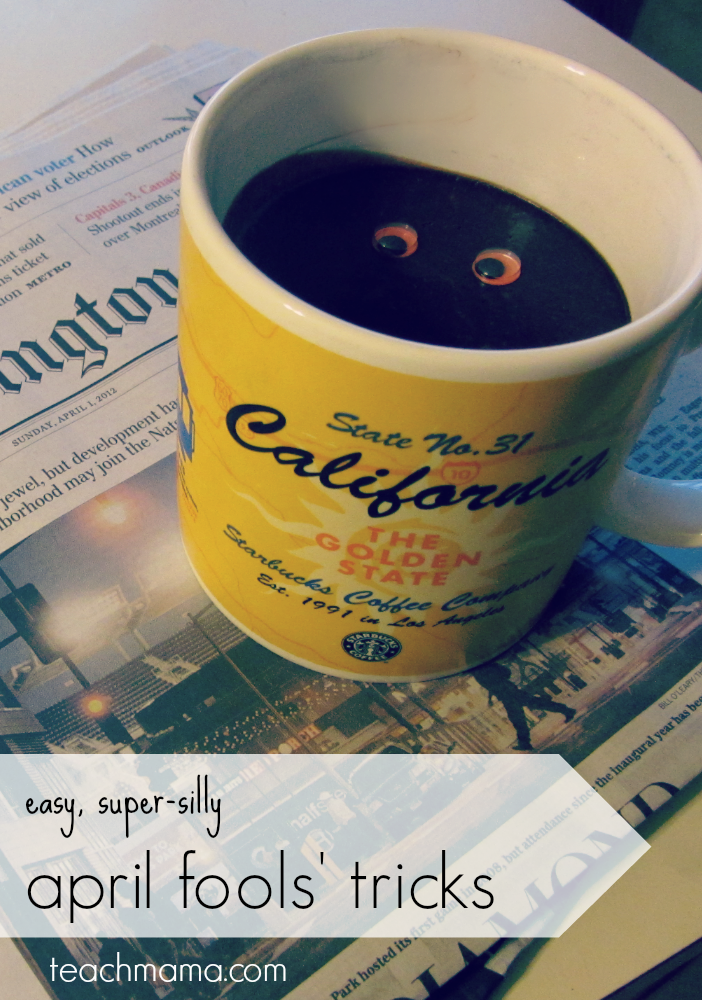 April Fool’s Day is another holiday where I’ve leaned more toward the silly than the really tricky. I love thinking about my ‘big’ April Fool’s Day tricks and hearing my kids’belly laughs when I pull one on them.

This year, because April Fool’s Day fell on a Sunday, I knew I’d have three little helpers at home with me, making it hard to be really sneaky and tricky.

So I thought I’d gather my resources and use them to my benefit, as my backup. . . to trick my husband.

Not only did we get my husband with two hilarious tricks, but this year I pulled off a few other really great April Fool’s Tricks (woot!) on the kids–ones that are totally worth sharing.

This year, I thought that I’d go simple–really simple–but go with something that really packed a punch.  So Maddy, Owen, Cora, and I had a brainstorming session on Friday while my husband was at work.

We need to really get Daddy this year, and I want your help, I explained. 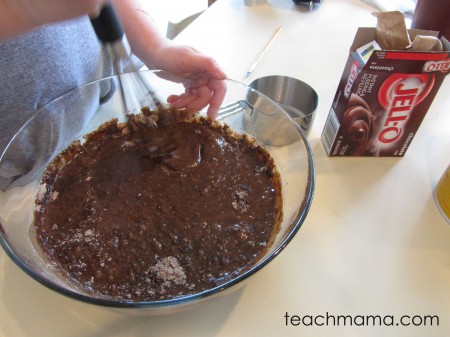 Sunday is April Fool’s Day, so let’s put our heads together to think of a way that we can trick Daddy.  What are some things he does every single Sunday? Or every morning? And maybe we can somehow stick a trick in one of his daily habits.

The kids threw out the obvious: He wakes up! He takes a shower! He drives his car! He drinks coffee! 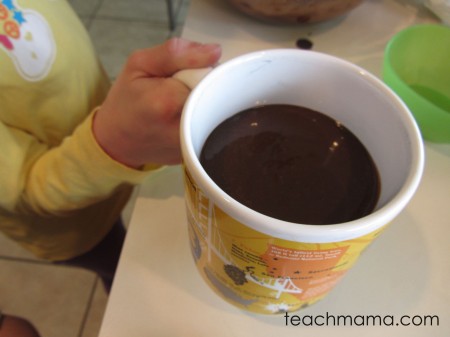 And coffee it was. That’s it! I said.  Let’s do something with his coffee. But what?

Maddy suggested putting pepper in the coffee to make the taste funny.  That’s an option, but is there a way to make the trick sweeter instead of totally yucky? I don’t want him to spit it out on the floor.

How about pudding? Let’s make chocolate pudding and put it in Daddy’s coffee mug as a trick.  Perfect! 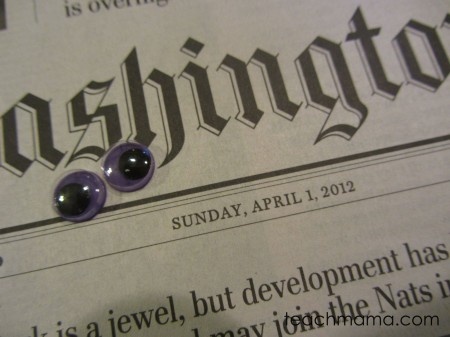 So Cora and I made the pudding on Saturday afternoon, poured it into my husband’s favorite mug, and hid it at the back of the fridge.

In the morning, I started the coffee maker and shuffled around a bit, then I put his coffee on the counter.  And I put two googly eyes on top for an extra kick.

(fyi: Maddy told me I ruined the trick by putting the eyes on and that Daddy would have been totally tricked if I hadn’t done that.  But I loooove googly eyes and couldn’t help myself.) 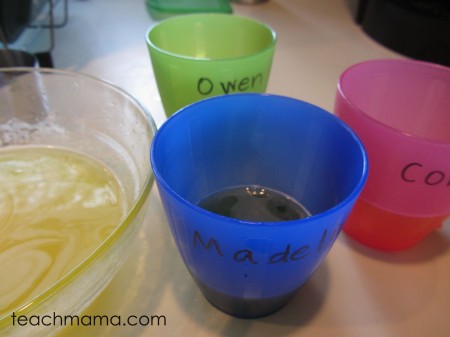 I also got the kids with Jell-O in their juice cups–something I had done in years past but that I thought they’d not have in their radar since we were doing something similar for their dad.

Lemon Jell-O in a juice cup with a teeny bit of real apple juice over top? I know I got Cora but Maddy and Owen said their cups felt heavier! They’re getting so smart! 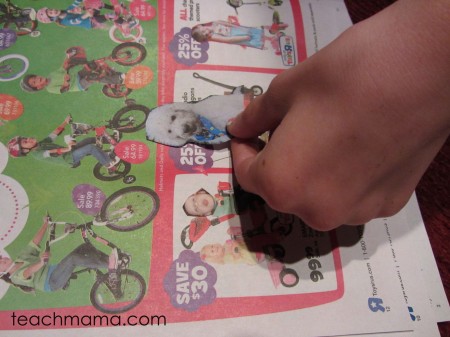 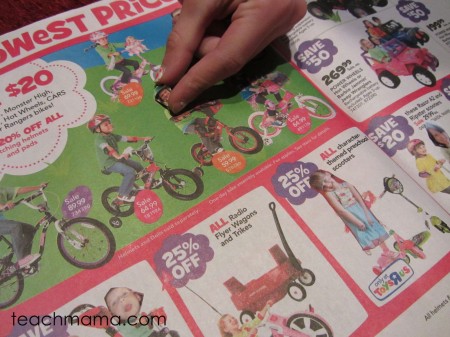 Our original plan was to sneak our pictures on the heads of the famous golfers in my husband’s Golf Magazine, but we couldn’t find the latest issue, so we used something else he reaches for every weekend–the circulars for his favorite stores.

We’ve been talking about buying a new bike for Owen or a new playset for our backyard, so I grabbed a toy store circular, and because my husband is on a perpetual search for televisions and electronics, I grabbed an electronic store circular as well. 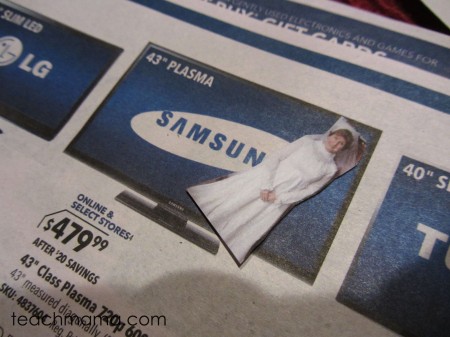 Who’s that bride on tv? Think my husband noticed it was his mother in law?

Then I printed a ton of small photos of our family and friends on a contact sheet printer setting so that the photos would come out very, very small–perfect to tape on top of the sales circular models!

And Owen, my early riser, helped me choose the best photos for the best spots, and before we knew it, we were ready to go!

It. Was. Hysterical.  We laughed as we put Brady in a wagon, Maddy jumping on a trampoline, Cora posing on a playset, my mom on a tv, and Owen’s head on three different bikes. It really was funny if I say so myself. 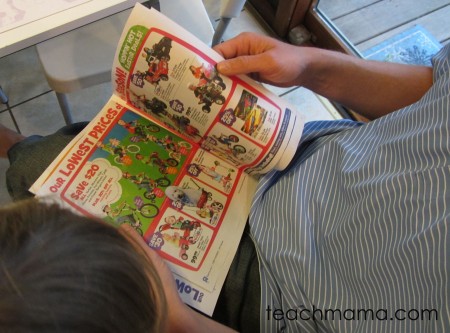 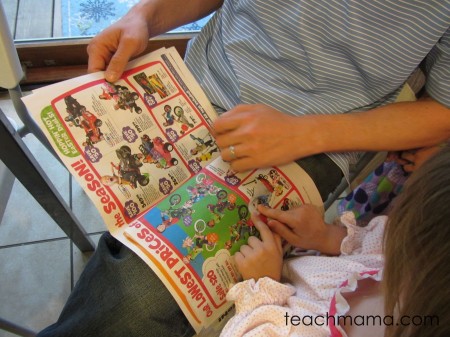 And as he flipped through the circulars, looking for good prices on bikes (my prompting), do you think he noticed his family among the models? Nope!

Do you think he noticed his dog smiling back at him from the pages? Nope!

Finally, I think he realized the unnatural quiet in our kitchen as we stared at him in disbelief, and that–along with Cora’s pointing–may have clued him in.

And this either means that my husband is a pretty intense shopper or that he’s got a pretty good-lookin’ family that seemed pretty natural on the page that he didn’t blink twice.  I think it’s a bit of both. . .

And that’s it!  Just a few fun ways to sneak in some easy, silly April Fool’s tricks for kids and family!   Already looking forward to next year!

Please, please, PLEASE if you have good ideas for me–do share!

Our many hilarious ideas include: