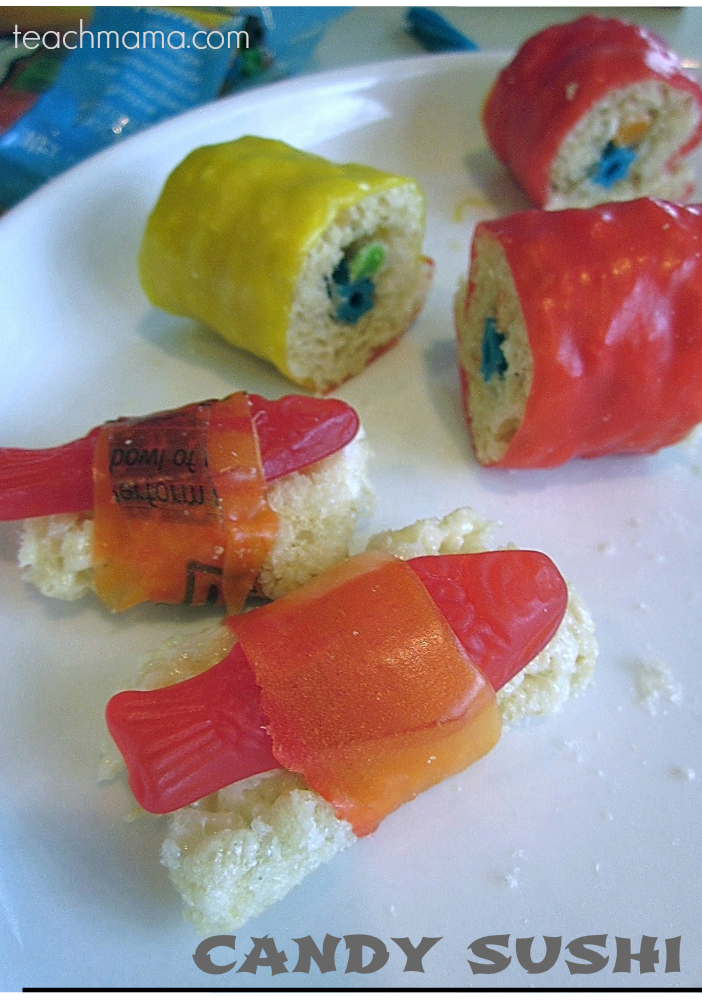 What better sweet, beautiful, make-your-own-snack for a birthday party than Candy Sushi?

Maddy requested sushi for her birthday dinner, but because we had already planned a big ole cheerleading birthday bash, complete with a ton of buddies, real cheerleaders, pom poms, and pizza, we couldn’t swing both real sushi and a real party.  My family just can’t roll like that.

So Maddy settled instead for her second choice birthday dinner (hotdogs, and fries–whew!) and scored some Candy Sushi at her birthday party. A family I tutor for was making these last month for a fund-raiser at their school, and the minute this sweet-tooth mom laid eyes on them, it was Candy Sushi love at first sight.

Our sushi took practice, and even with practice, Candy Sushi-making at a 7 year-old’s birthday bash took a lot of help from the moms (and awesome cheerleaders and aunt) who stayed.

But the finished products were beautiful, delicious, and so very, very, very awesome.

Our Candy Sushi wasn’t perfect, but it sure was pretty.

Cora and I practiced making the Candy Sushi on Friday, while Maddy and Owen were at school.  I followed the very basic Rice Krispie Treats Recipe, using only name-brand ingredients.  (In my long-time Rice Krispie Treat (RKT) obsession, I believe that’s the ticket to the best treat.)

It took me only one try to figure out that I needed to add about one more cup of marshmallows (about 6 big ones or one cup tinies) to make the RKT pieces softer and easier to actually roll. 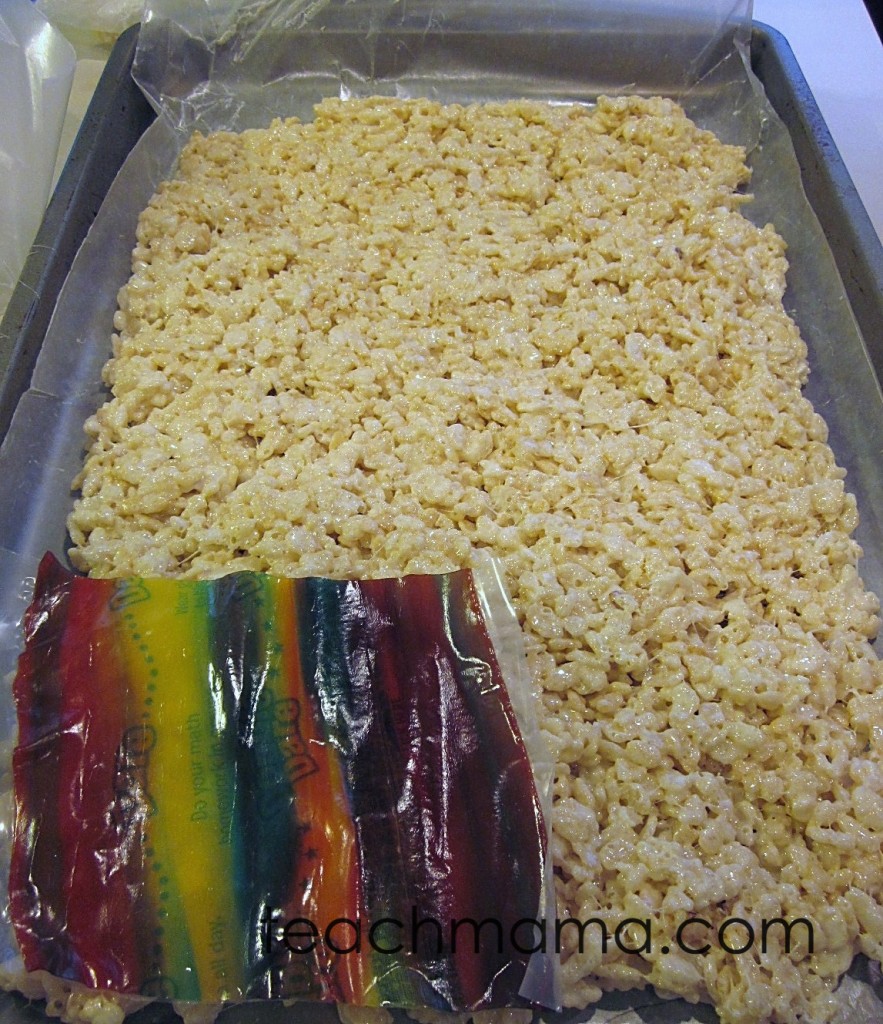 I unwrapped one Fruit Roll-Up as a measuring tool–I knew the Roll-Up would be our ‘seaweed wrap’, so if I flattened the RKT enough, I could make six Candy Sushi rolls out of one batch of RKT’s.

Then I cut wax paper just big enough to separate each RKT piece.  I sprayed Pam first on the wax paper, then on top of the RKT piece to avoid sticking. I’m glad I did because it made it much easier to separate at the party. 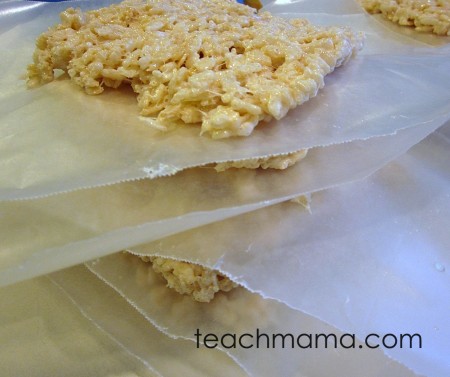 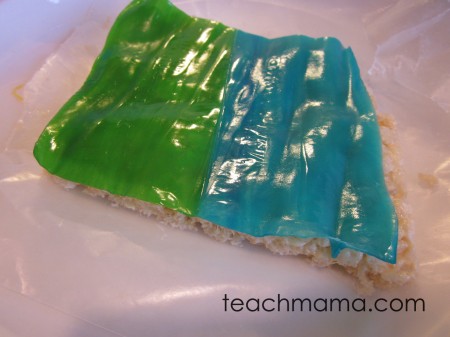 . . . the RKT pieces had to fit the Fruit Roll-Ups so that our sushi looked the part.

Next we unwrapped the Fruit Roll-Up and placed it on top of the RKT piece. I cut off the extra RKT parts to make sure the RKT piece fit the Roll-Up. (Not as confusing as it may sound.)

The fun part was ‘loading’ the roll with goodies. I had a bag of Rainbow Twizzlers, gummy worms, sour gummy worms, gummy bears, and Swedish Fish.  To the party, I added M & M’s to the mix.  We squished some sweets on one edge, and then I rolled the edge tightly. 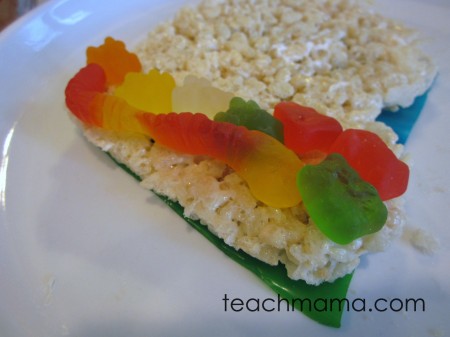 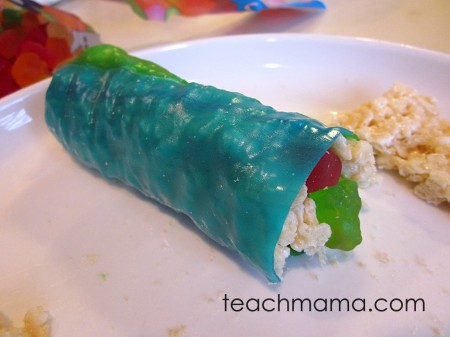 My intention was to make one Candy Sushi roll and then with the leftover skinny edge, cut it into two sashimi type pieces. I wanted the extra RKT parts to be the rice (obviously), to put one Swedish Fish on top, and to use the remaining Fruit Roll-Up as the seaweed wrap around it.  The first photo shows the two cute sashimi pieces.

Candy Sashimi was easy to do in the quiet of our home, but the kiddos at the party had a hard time with this. Some weren’t familiar with this type of sushi, and some of the rolls were too fat to allow for left-over.  No biggie 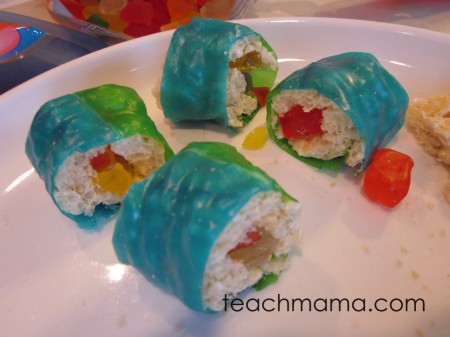 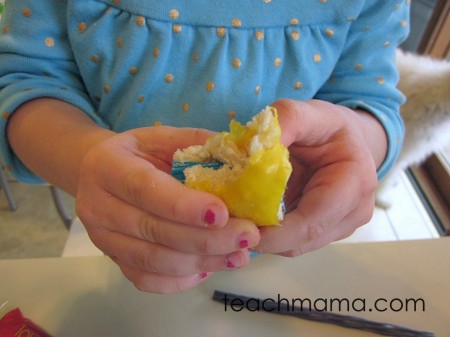 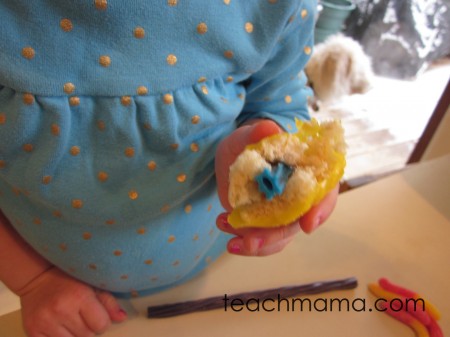 With a very sharp knife, I cut the roll into four pieces (and the parents helped me at the party), and (w00-hoo!) we had ourselves some Candy Sushi! 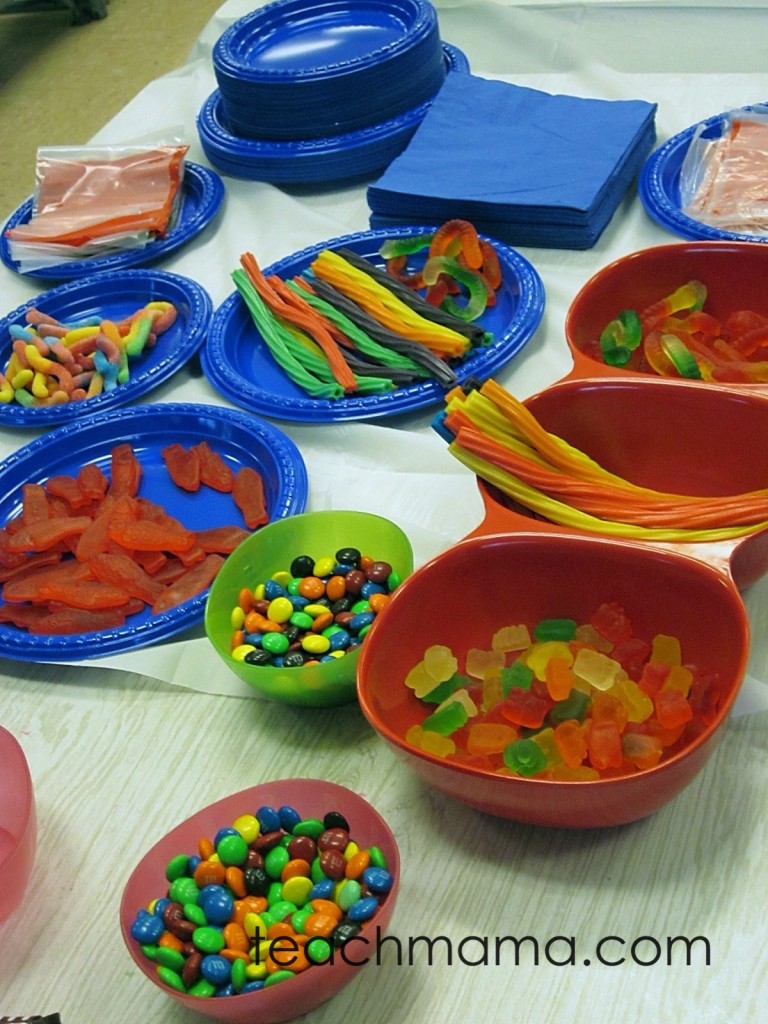 The Candy Sushi filling is ready for sushi chefs!

Although some kiddos ate a piece of sushi or a handful of sweets, the parents and I quickly bagged the Candy Sushi  in tiny craft-store cellophane bags and tied them with pretty ribbon so they doubled as party favors for the kids to take home.

Then the kids moved to the pizza table, ate their lunch, did their final routine (more on that later!), and grabbed the sushi on their way out the door! 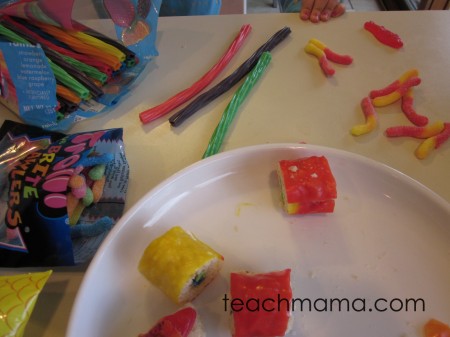 And that’s that–Candy Sushi to replace Maddy’s first-choice birthday dinner.   I think it was a win-win.

This certainly won’t be our last time playing with candy and RKT’s in the name of sweet sushi–that’s for sure.  I’m already thinking about the next time we can make it and maybe even planning my next April Fools trick. . .

Our many hilarious ideas include: