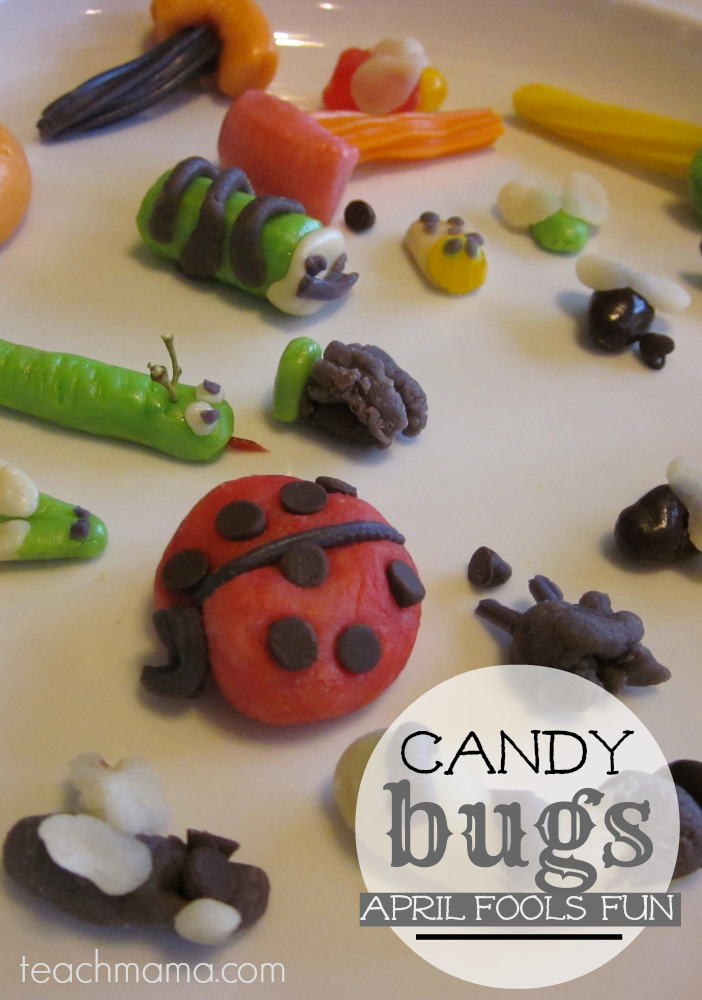 April Fools’ Day is practically upon us, and I thought that before I served the kids jell-o in their juice cups tomorrow (seriously, how funny is that?!), I knew I wanted todo something that would top last year’s April Fools’ win.

So I thought and though and thought some more and came up with fake bugs–what’s better than a good bug scare, right?

I knew Maddy had a play date planned for this morning, so my idea was this: serve Maddy and her pals their snack but (bam!) the fake bugs

would be in the snack bowls. And (eeee!) instead of killing the ‘bugs’, I would run over, grab one, and put it in my mouth, chew it, and swallow it. Smiling.

It didn’t go quite as planned. But it was still really funny (probably more for me) but the girls had a fun time playing with candy–eating the candy–and trying their hardest to make bugs that would scare the pants off of their brothers, sisters, and parents.

Here’s how it went:

Yesterday, Cora and I really tried to make stink bugs on two separate occasions, until finally she said, Mommy, let’s just do another bug. She was right.

We needed to move forward. So we did. 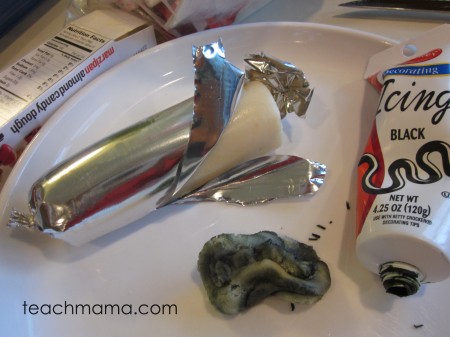 I used a black icing mixed into a marzipan candy dough I found at the grocery store, but I just couldn’t get it flat enough, I couldn’t make legs or antenna that were skinny or strong enough, and I couldn’t make it textured enough.

It did create a mean millipede, a teeny, skinny wormish guy, but that was it. 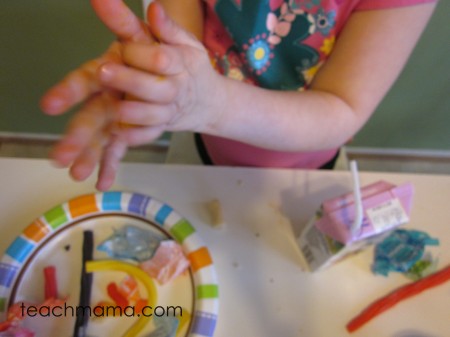 I moved onto bigger and I probably could have stuck with Tootsie Rolls—the flavored kind–for everything that we ended up doing.

It was fine for creating little made-up bugs–teeny green bugs with white (marzipan) wings and eyes.

Cora and my bugs–ready to trick the girls! 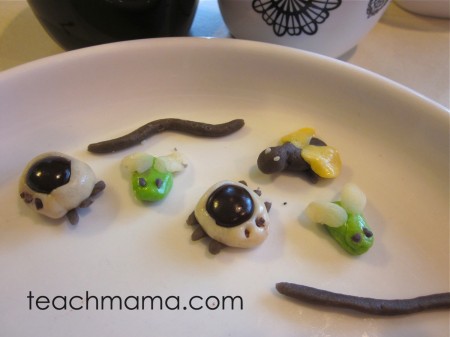 To ‘spook’ Maddy and her friends, Cora (the kiddo who just can’t whisper and is probably the worst at secret-keeping) and I made: 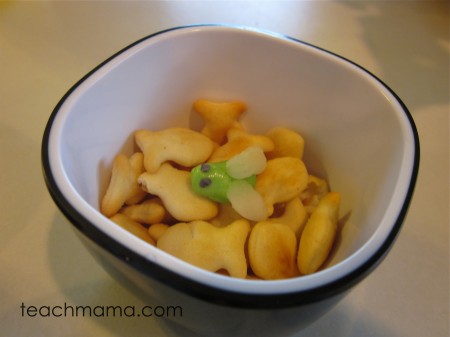 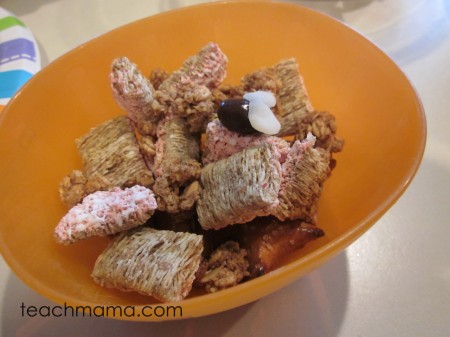 I poured some Goldfish, snack of every playdate, into bowls, and called the girls to the table.

Cora was sooo calm and cool, and I’m sure she wasn’t staring into each kid’s bowl.

One of Maddy’s friends dug in and paused.  I said, Are you okay, honey? 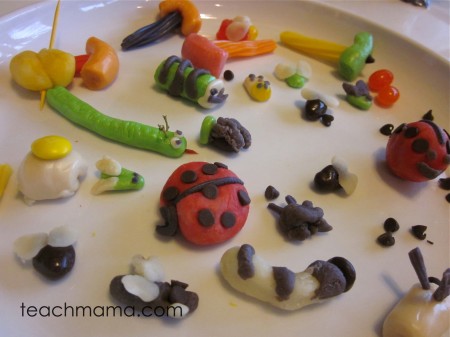 What, you mean the goldfish? Sure. I was so busy putting away dishes, I hardly noticed the poor kid.

I walked over and it was over: OH MY GOSH ARE YOU KIDDING ME? There’s a bug in there? Oh NO!! What do I– How did that–

By then the other kids came in and were pondering their bugs. Maddy was a cucumber: Mom, really? Is this candy or something? You’d think she was like 25.

Fine. They’re candy. But I really tried to get you and you are all way too smart for me. So how about when you’re done with your fish, we can put our heads together and make some totally awesome, absolutely terrifying bugs that will scare the pants off of your family? Tomorrow’s April Fool’s Day–you have to trick someone. . . 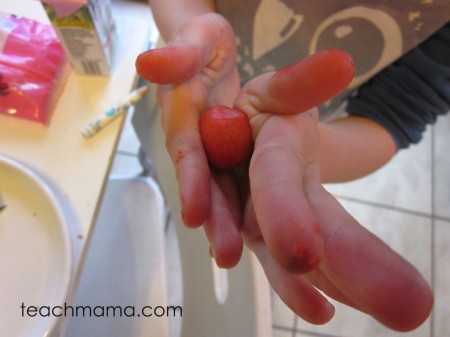 Maddy rolls her marzipan with red food coloring to make the most realistic ladybugs evah.

Really, the girls needed no arm-twisting.  They were totally into it before we even started.  I laid out a spread of candy bug options, but they figured everything out quickly.

I stressed the importance of tiny–teeny, teeny, teeny–for the bugs to even look a bit real, but they didn’t worry. We rolled, cut, twisted, stretched and ate more candy than I’ll ever admit to their moms (who are my great friends and who will love me anyway). 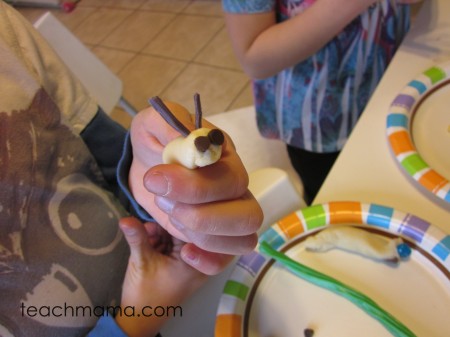 They added antenna, made legs, and added color; they chatted about this and that, about what bugs we like–and don’t–and who they wanted to scare tomorrow.  They added wings to this and that, made bodies long and short, used everything on the table.

They put their bugs in bags and when they left, they said they’d hide it and use it tomorrow. We’ll see. . .

By the time Owen returned from his playdate, we were ready to give him a scare. I put his snack in a bowl and when he grabbed it, he popped the fly right in his mouth like he does it every day.

Seriously, Owen, it didn’t scare you even a little bit? C’mon–

Just wait till they try drinking their Jello-O juice tomorrow at breakfast. . .