That’s what she calls is.

But I don’t care what she calls it because all I know is that she wants to play it–like every single day.  And it gets her saying words with sounds she needs to practice, so I’ll take it.

It’s actually a blank game–one that can be catered to any sound that a kiddo needs to work on–and all you need are picture cards or objects that contain sounds that your little one needs to work on.

Now that Maddy and Owen are in school most of the day, I really have time to play games that ‘count’ for Cora. She and I usually do a lot of reading, a ton of puzzles, and crafty crafts, but she’s never been a ‘gamer’.  So I know I’ve got to get tricky and sneaky if I want my tiniest to engage in any one of my games.

I’ve meant for a long while to find some ways of incorporating activities to help Cora with some of her pronunciation troubles, particularly those always-tricky s-, t-, l-, and r- sounds.

So we created an uber-fancy board, pulled out a bunch of gems and jewels and stickers, added a boatload of glitter, and topped it all off with a few of those challenging sounds–and what we created is Cora’s Sparkle-icious Game.  Or her Fancy-Nancy Game. She changes the name often. The blank board and the picture cards, ready to morph into a game! 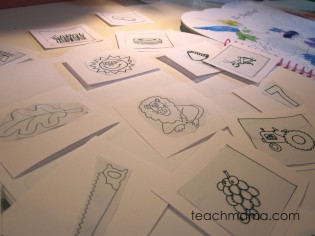 I made a blank game board in the shape of a heart; I was pretty sure that though she loved her Extra-Special, Just-for-her Color Game a while back, at this point in her life, Cora would prefer something a little more. . . fancy.

I then searched for some pictures of objects that contained the sounds I wanted to focus on. I knew that I wanted to help her practice her s-, t-, l-, and r- sounds but having her focus on all of the difficult sounds at once might be too frustrating for her. This whole plan would backfire if it threw Cora into a frustration mode instead of a fun mode, so I had to be careful.

Knowing that she can very easily pronounce g- words, I chose to use pictures that began with letter g- but that contained some gr- blends; that way, she was secretly practicing the r- sound but also successfully pronouncing the g- sounds.  I also added some t- and s- digraphs and blends to the mix because I knew she could pronounce the lonely t- and s- but she needed work on the combo sounds. Cora could not wait to ‘beautify’ her board game. . .

I also searched for pictures that included the beginning l- sound, which she could definitely pronounce, as well as l- blends and mid l- sounds; those gave her more trouble.  Again, I wanted her to be able to meet with success with some things but to practice those sounds that were tricky for her.

Words Their Way provided most of the picture cards (I used beginning s-, t-, g-, and l- along with some gr-, gl-, sl-, st-, and tr- blends.  However, I also found a bunch of picture cards at the Kid Zone site that can be downloaded and printed. 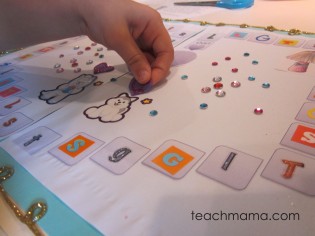 I printed out coras heart game and glued each piece on a blue piece of cardstock. I then secured both sides of the heart board in the inside of a manilla folder.  I cut out the purple heart–the ‘finish line’–and placed it in the center of both hearts.

And then we started decorating.

I told Cora that since Maddy and Owen were in school, that this was a game especially for her. It would be a game where we played with letter sounds and she could do all of the decorating and make up the name of the game. We chatted as we decorated–actually, I put the letter stickers on each game board square (upper and lowercase l, s, t, and g), and Cora added stickers and everything sparkly.  We talked about flowers and Brady and school and nail polish and her cousins and the weather, and soon we were finished.

I said, Okay, my friend. Let’s hunt for the most amazing game pieces we can find. What do you want to use?

Awesome, I said. Let’s grab some.

Thanks to our Gem Jars, we always have a gazillion little shinies around, so as soon as we found ones we wanted to use, we got rolling.

I said, So the goal in this game is to be the first person to make it from this tiny heart, where it says ‘Start’ to the big heart where it says ‘Finish’.  In order to do that, you have to flip cards, say the word that you see on the card, really focusing on the sound that you hear at the beginning of the word.  Then you have to figure out what letter makes that sound, and then you have to move your piece to that letter. Get it?

She did, and she was ready to go. Even my ladybug Cora wanted to play her Fancy-licious Game at bedtime.

We took turns flipping cards, identifying the picture on the card, and figuring out what letter began the word: Hmmmm, looks like I have a ‘sun’ here. Sssssssun. Sun. I hear the ‘s’ sound at the beginning of ‘sun’, and I know that ‘s’ makes that sound, so I need to find the next ‘s’ on the board. Woooo-hooo! Look how far I can move!

From start to finish, we worked our way around the heart board, identifying both beginning sounds and the letter that made the sound. And we also talked about uppercase and lowercase letters as well.

Cora won the first game fair and square, and I won the second. I can’t remember who won the rest because they’re all blending into one big, sparkly, glittery, beginning sound blur. . .

And that’s it–just a whole lot of Fabulous, Fancy, Fancilicous Game-playing in the name of some sneaky-sound practice!

It was fun, and it was light, and when Cora mispronounced a word–which she definitely did–I simply repeated it correctly–I didn’t stop her or embarrass her by saying Nooooo, it’s not ‘twain’! It’s tRRRRRain. Train. Let me hear you say it.  That doesn’t do any good, and I know her speech sounds will come with time.

But like I did with Owen, little bits of practice here and there–disguised as fun and totally low-pressure–can’t hurt every now and again.

Happy game-playing-and please let me know how you adapt this game for your little ones!