quick counting in the kitchen

I am a keeper of children’s small yogurt containers. I have been one for some time now, and I have used them for the occasional snack, for water to clean paintbrushes, for stacking, for playing “hide the cup”, for organizing tiny toys, for building castles in the sandbox. They certainly don’t last forever, so I don’t care if they get lost of crushed, stuck outside, or thrown in the recycle bin after a few weeks in their new life. 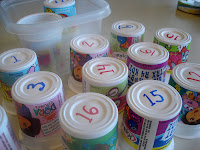 Today, the 16 empty containers served as my helper for making dinner. Here’s how:

My patience nearly gone, the clock ticking because I had to leave for a tutoring appointment the minute Brent walked in the door–I needed something. I grabbed some Sharpies, threw numbers on the bottoms of the containers, and I had an activity for the 10 minutes I needed to finish dinner.

I said, Okay, Owen. I have all of these containers here, and there’s a problem. (I unstacked them and put them on the floor as I continued. . .) They have numbers on the bottom of them, but they’re all out of order. Can you and Cora put them in order on the floor while I finish dinner? Use the line of the tile to keep them straight. Here’s number one. Can you find two? Right! There it is. Put him next to his buddy, Number One. You do the rest and have Cora help you.

Owen liked being the teacher for Cora, and she liked the attention from her brother. It worked so well that Maddy came in running to see what they were doing; I told her that Owen would put the numbers in order first, and she could do it next.

When Owen finished, I had him count to make sure his work was correct, then I told him to scatter his cups so Maddy could try. This was most definitely his favorite part of the whole deal, but that was fine with me; I was secretly elated that I had the counter to myself. Maddy put the cups in order, and then they tried to build pyramids for a couple of minutes while I poured milk and put their plates on the table.

Brent walked in the door, and we had Maddy, Owen, and Cora grab as many cups as they could and stack them together so we could eat. It was quick, it was fun, and now it’s a new reason to save these silly cups.